Captive-bred ball pythons are generally very healthy, hardy and resilient animals. Learn everything you need to know about the ball python behavior & health in our guide: 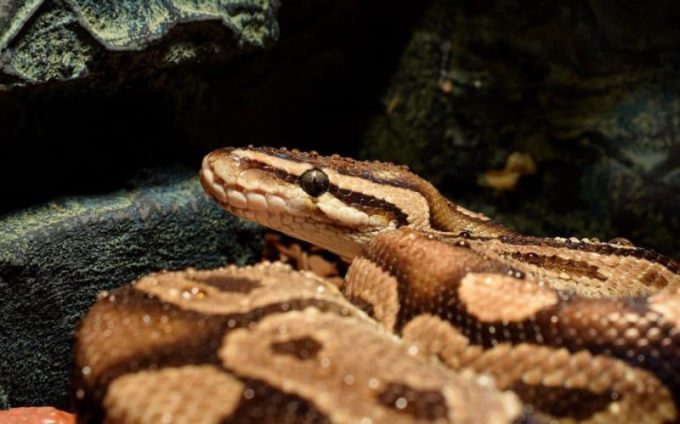 The typical health and behavior of a species are important considerations for anyone seeking a pet reptile.

Species that commonly experience serious health issues or problematic behaviors, for example, are poor choices for beginners. Instead, reptile-keeping novices should stick to species that are usually healthy and – if you’ll pardon the anthropomorphism – happy.

Relatively early in my snake-keeping career, I had the “opportunity” to work with thousands of imported ball pythons (in those days, captive-bred ball pythons weren’t widely available).

Almost every single one was suffering from more than one health problem. Tick infestations, respiratory infections, poor sheds, and infected wounds were common. None of them wanted to eat for at least a month, and some would refuse food for nearly a year. Needless to say, these snakes were very difficult to maintain, and they’d make horrible pets for most first-time owners.

But captive-bred ball pythons are generally very healthy, hardy and resilient animals, and they’re among the more docile snakes available to hobbyists. We’ll talk about the health and behavior of ball pythons in greater detail below, so that you’ll know what to expect from your new pet.

You’ll notice your ball pythons performing a few common behaviors over time, including those explained below.

We’ll examine a few of the more noteworthy behaviors ball pythons exhibit below.

Ball pythons, like all other snakes, shed their skin periodically. This can occur as often as once every three or four weeks, or as rarely as once or twice per year, depending on the size, age, and health of the individual.

Proper sheds should come off in one long piece. But unfortunately, ball pythons who are sick, mite infested or dehydrated often shed in multiple pieces or fail to shed completely. This can cause long-term health problems in some cases, so it is important to take steps to eliminate the problem.

Accordingly, you’ll need to help your snake remove the retained skin and rectify the problem that caused it. You can usually help a ball python free himself of the retained skin by soaking him in a bit of room-temperature water for an hour or two.

Be sure that the water is only deep enough to cover your snake’s back – he shouldn’t have to swim to keep his head above water.

After soaking him, you can likely pull the retained skin off with gentle pressure. Do not force any scales off – especially those located around the eyes or face. If any stubborn spots remain, soak your snake again the next day and try again. If this isn’t effective, contact your vet and seek his or her assistance.

> Further reading: Ball Python Shedding: All You Need to Know 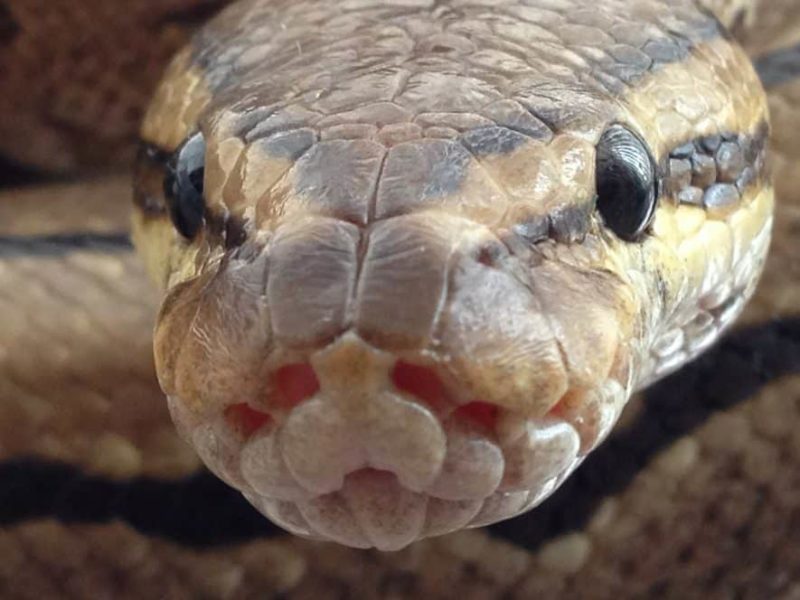 Biting is the behavior that often elicits the most attention from new keepers. This is understandable – nobody wants to be bitten by a snake.

However, it is important to note that ball python bites are rarely very painful, nor are they likely to cause much damage. Typically, they’ll cause a few minor breaks in the skin, which will ooze a trickle of blood.

Bites rarely require much more first aid than simple soap and water. However, if the bite displays any signs of infection (redness, swelling, etc.), contact your doctor. It is also important to feel the wound carefully to ensure no teeth were left in your skin.

> Further Reading: Does a Ball Python Bite Hurt (and Why Would Your Pet Bite)?

Below, we’ll discuss the best way to handle your ball python, and then we’ll share a few tips and tricks that’ll likely make it easier and more enjoyable to do so.

Although you’ll certainly need to adjust to different circumstances and individuals, the best way to handle your ball python is as follows: 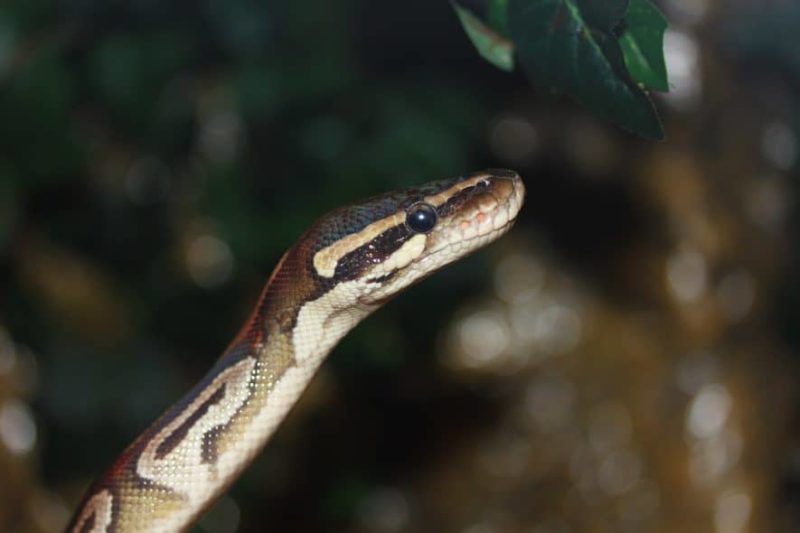 Try to follow the procedure outlined above, but from time to time, you may find the following tips helpful:

Note that you should never handle your ball python who’s recently eaten. Doing so may cause him to regurgitate his last meal. This not only creates a thoroughly disgusting mess, but it is also stressful for the snake. It’s also a waste of money, as that rodent will now be useless.

As a general rule, you should wait for at least 24 and preferably 48 hours after feeding your snake to handle him. This assumes that any bulge created by the meal has shrunk. If you can still detect a food bulge, do not handle your snake. 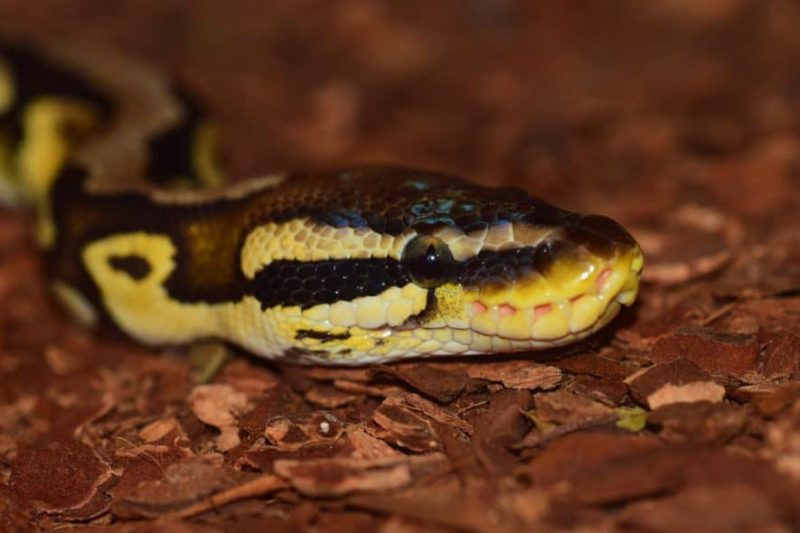 Illness and Disease: Signs of a Sick Ball Python

Some of the most common health problems that afflict ball pythons are explained below. These are certainly not all of the possible diseases and conditions that may threaten your pet, but they deserve the most attention.

Any snake can suffer from a respiratory infection, but snakes that hail from tropical areas – including ball pythons – are often especially susceptible to them. Because snakes cannot cough, they have great difficulty expelling the fluid which can accumulate in their respiratory tract. This means that a simple “chest cold” can quickly prove fatal in snakes.

A few of the most common symptoms of respiratory infections in ball pythons include:

If you notice your ball python exhibiting any of these symptoms, contact your vet and schedule an appointment at once. While ball pythons occasionally recover from extremely mild respiratory infections without veterinary treatment, most will require medications to help combat the infection.

> Further Reading: How to Tell if My Ball Python Is Dying?

Obesity can cause health problems for ball pythons, so it is important to keep your snake at the proper body weight. While experienced keepers are often able to accurately assess body condition, it is often difficult for novices to do so. Accordingly, beginners should visit their vet regularly (perhaps once per year) to ensure that their snake is in good health.

Some of the most notable locations in which ball pythons store fat include the rear portion of the head and the sides of the tail base. Additionally, the spine and ribs can provide clues to the snake’s body condition. You should be able to feel your snake’s ribs, but they should not be visible in most cases.

Obesity takes a long time to treat in snakes – they don’t need very many calories in the first place. Accordingly, it is important to avoid the problem entirely.

A lot of new owners worry that their new ball python has an eye infection, but eye infections aren’t terribly common in snakes. I can only remember caring for one snake out of thousands that had a legitimate eye infection – and that was a water snake, not a ball python.

However, ball pythons do frequently experience two other eye-related problems:

Unfortunately, it can be very difficult for beginners to distinguish between these two problems. So, the best thing to do is simply visit the veterinarian if you notice anything unusual about your ball python’s eye. Neither of these issues is terribly difficult for your vet to treat – he or she can likely remove a retained scale or help you rehydrate your pet.

The snake mite is a tiny arthropod that feeds on the blood of snakes. And unfortunately, they are both extremely common and extremely difficult to eradicate – particularly for snake-keeping novices.

Individually, mites don’t represent much of a problem, although they’re probably irritating to the snake. But, when their numbers climb into the dozens, hundreds or thousands, they can cause serious physical stress. Death from mites is rare, but it is possible.

Mites essentially look like a moving speck of black pepper. They’re easy to spot against a white enclosure wall, but they’re very difficult to see on the dark portions of a snake’s body.

The easiest place to see them on your snake will be his ventral side, especially the portion under the chin (check in the crease running down the center of your snake’s lower jaw).

Eradicating mites is complicated because the mature females are constantly leaving your snake, moving into the environment and depositing eggs. So, you’ll often have to utilize special medications that will kill the next generation of mites, or you’ll need to go to great lengths to eliminate the mites on your snake and those living in the environment.

In either case, beginners are wise to immediately seek veterinary assistance when confronted with mites.

Mouth rot is a bit of a catch-all term for various infections that manifest in the mouth of a snake. It is pretty disgusting – it can cause your snake’s mouth to bleed, ooze cheesy material, loose teeth or worse. But if caught quickly, you’ll usually be able to stop the problem.

Mouth rot can be caused by a variety of different things, so you’ll need to work with your vet to treat the animal. Just be sure that you do so quickly, as this problem can progress drastically in a short period of time.

Ball pythons are usually healthy and easy-going animals. You just have to start with a healthy, captive-bred individual and then provide the proper habitat, diet, and care. Just be observant and look out for the symptoms of illness mentioned above. This way, you’ll be able to act quickly and give your snake the best chance of recovery.