Why My Bearded Dragon Turned Black?

Has your bearded dragon turned black? There are a number of reasons why this may be happening. This article provides an overview of these reasons and how to address them. 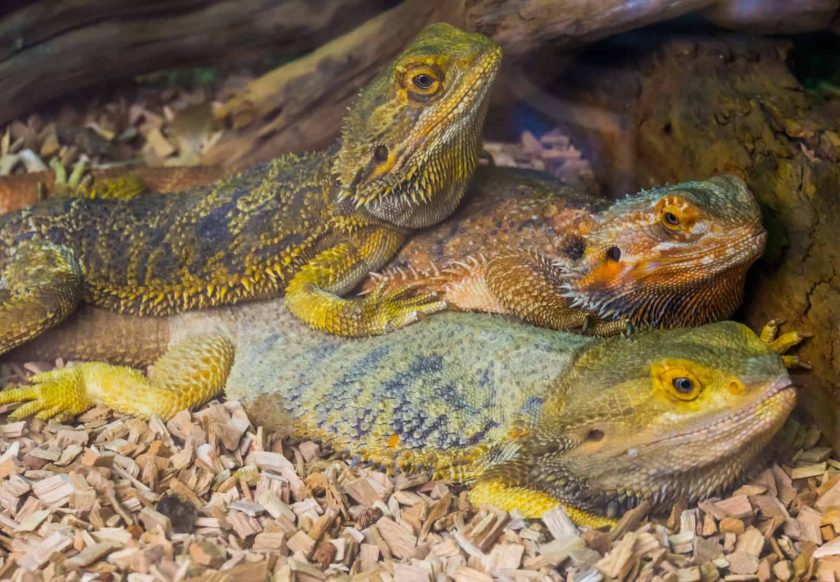 Bearded dragons will change color for various reasons, some of which are normal while others are not. Understanding why your bearded dragon turned black will require some detective work by you. It is important that you understand the reasons for your pet’s change.

I believe we should treat color change as a message our bearded dragons give us about their well-being. There are a number of factors that can cause your bearded dragon to turn black. These factors include:

We will now explore these factors in greater detail and how to address them.

Why Do Bearded Dragons Turn Black?

Chromatophores are designed to capture light which then causes a change in the lizard’s pigmentation. As the chromatophores expand, the skin’s pigmentation darkens. This process causes the bearded dragon to turn black under the skin. We will now explore the environmental factors that may be responsible for your pet changing color. 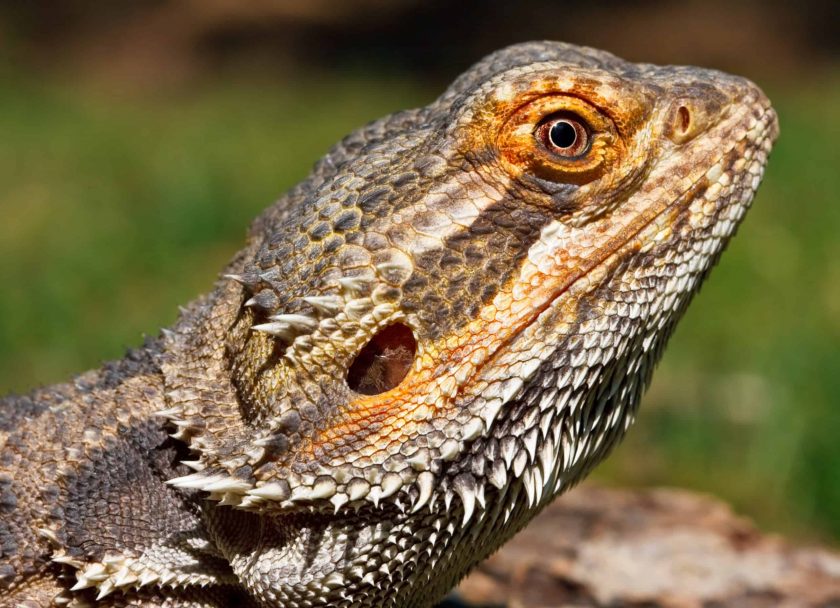 As with other reptiles, bearded dragons are exothermic, which is a fancy word for saying that they cannot generate their own body heat. While mammals can generate their own heat to warm their bodies, reptiles rely on the environment for heating and cooling their bodies. They are unable to regulate their temperature internally.

It is not unusual for bearded dragons to be dark-colored in the early morning hours. The morning hours are cool. To warm up, reptiles need to bask under a heat source, whether that is the sun or a heat bulb.

Further, heat is more easily absorbed by objects that are colored black. By turning black, your lizard can absorb heat more effectively. As its temperature increases, your dragon will normally regain its natural color.

If your lizard returns to its normal color after basking, then your lizard’s color change was a normal occurrence. However, if it remains black, I recommend you check to see if you keep your bearded dragon at the correct temperature.

By providing a thermogradient, you are allowing your lizard to find the temperature it needs to maintain its health. The following temperatures are recommended:

You can allow the temperature to drop between 70-75 degrees Fahrenheit at night.

Keeper Tip
Keep two thermometers in the enclosure so that you can monitor the temperatures of the basking spot and cooling area. 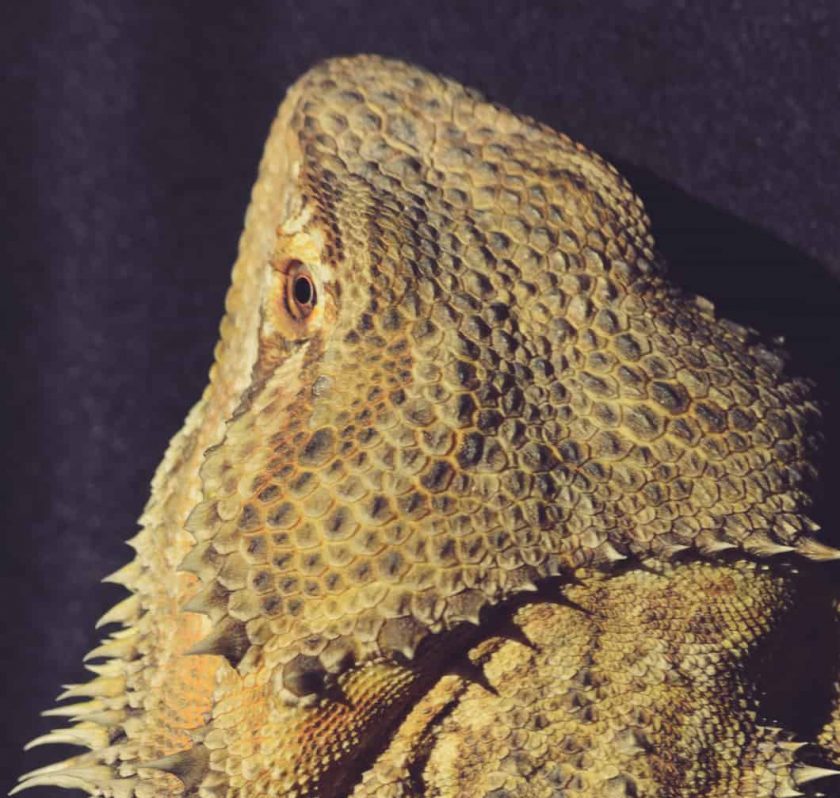 Changing Color Out of Fear

When bearded dragons feel threatened, they may darken as a way to appear more intimidating. Other signs of fear included rapidly opening and closing their mouth. Possible reasons for your bearded dragon being fearful include cage mates, other pets, and you!

Cage mates: Bearded dragons are naturally solitary animals. I highly recommend that you keep your bearded dragon alone. Keeping more than one animal in an enclosure can lead to stress for your animal.

Other pets: If you have a cat or dog, they can be a source of fear for your pet.

You: If your bearded dragon was newly acquired, it might be fearful of you if it has not been socialized yet. This situation should be uncommon as most bearded dragons that are available today are captive-bred.

If you are housing more than one bearded dragon together, separate them. If you have other pets, keep them away from the enclosure, or move the enclosure to another part of your home.

As mentioned in the previous section, bearded dragons are solitary animals. They are also very territorial. If you keep more than one lizard in the enclosure, then your pet may be turning dark as a way to express dominance.

Also, bearded dragons’ necks turn black when angry. Other examples of dominance expression include bobbing the head and expanding the beard to look larger.

Addressing dominance is the same as addressing fear, which is separating your animals.

At mating time, male bearded dragons will try to impress the females by putting on a display that includes turning dark and expanding their beards. They also may rapidly bob their heads up and down.

Some research suggests that males turn black during the breeding season as a way to improve thermoregulation. With their backs turning black, bearded dragons can absorb more heat and spend less time basking. Less time basking means more time for the mating season. It has been estimated that, during the mating season, bearded dragons can save around 85 hours of basking time by using this method.

What Should You Do?

Brumation is a state that some reptiles go through during the cooler seasons, and it is similar to hibernation. Hibernation usually occurs in mammals, and it involves bodily functions coming to almost a complete halt. In contrast, brumation occurs mostly in reptiles.

During brumation, reptiles do not enter a dormant state like hibernating animals. Instead, their bodily functions remain active but at lower levels of functioning. When coming out of brumation, bearded dragons may be black in coloration, which is normal.

What Should You Do?

If your bearded dragon is coming out of brumation, there is not much that you can do other than to be patient with your lizard as it regains its full functioning.

The final possibility for your bearded dragon turning black is an illness. If an illness is behind your lizard turning black, other symptoms will also appear. Look for any of the following:

If your bearded dragon’s tail turns black, it may be a sign of tail rot. Tail rot is often caused by the lizard not shedding successfully. With tail rot, the tail is constricted by the old skin, causing it to rot.

Also, if your bearded dragon’s underside turns black, it may indicate that it has an impaction in its digestive tract. An impaction is an obstruction of the digestive tract, which can be caused by the ingestion of foreign matter or eating feeders that are too large.

The overfeeding of mealworms can also cause this, as mealworms have an outer coating that is difficult to digest. In females, a black abdomen may mean they have eggs they cannot lay. Either of these conditions can be fatal, so bring your pet to a veterinarian as soon as possible.

The key to preventing illness is prevention. It is important that you provide your bearded dragon with the proper husbandry that it deserves. Proper husbandry includes maintaining the proper temperature and humidity levels.

It also includes providing a varied diet that includes both plant and animal matter. Additionally, bearded dragons require vitamin and calcium supplements along with UVB lighting.

If you think your female beardie has turned black because it is egg-bound, you need to take it to a qualified veterinarian as soon as possible. If the eggs don’t get removed soon, your lizard may develop a very serious infection that can kill her. 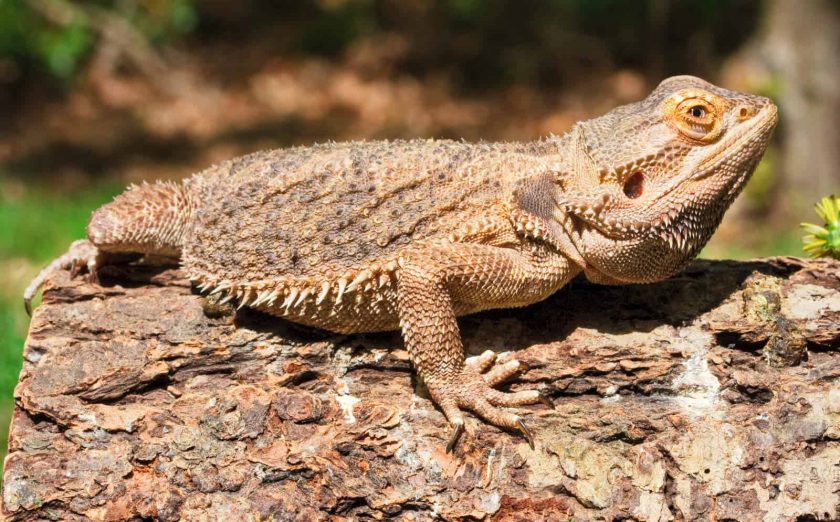 Should You be Concerned if Your Bearded DragonTurns Black?

To answer this question, I recommend using this article as a checklist. Remember that at the beginning of this article, I stated that you need to treat your lizard’s color change as an investigation. Start with temperature and work to the section on illness:

If you identify any of the above items as fitting your pet’s situation, make the recommended adjustments. If none of these items apply, you may want to consider that a health issue may be involved.

We hope that you enjoyed this article. It is normal for your bearded dragon to turn black occasionally. When bearded dragons turn black frequently or for prolonged periods, it may be a warning sign that a husbandry issue needs to be addressed. We invite you to submit your questions or comments.

Andrew has taught life science as a middle school science teacher, and he has worked as a zoo keeper at the Phoenix and San Antonio Zoos. He also had a private collection of exotic and native reptiles. Today, he develops curriculum for the College of CSET at Grand Canyon University, in Phoenix.

Andrew Silver
Andrew has taught life science as a middle school science teacher, and he has worked as a zoo keeper at the Phoenix and San Antonio Zoos. He also had a private collection of exotic and native reptiles. Today, he develops curriculum for the College of CSET at Grand Canyon University, in Phoenix.