Superworms are known as feeder insects that are widely available, highly nutritious for your reptiles, and easy to keep at home. Are superworms as super-cool as the rumor has it? Read on and decide for yourself! 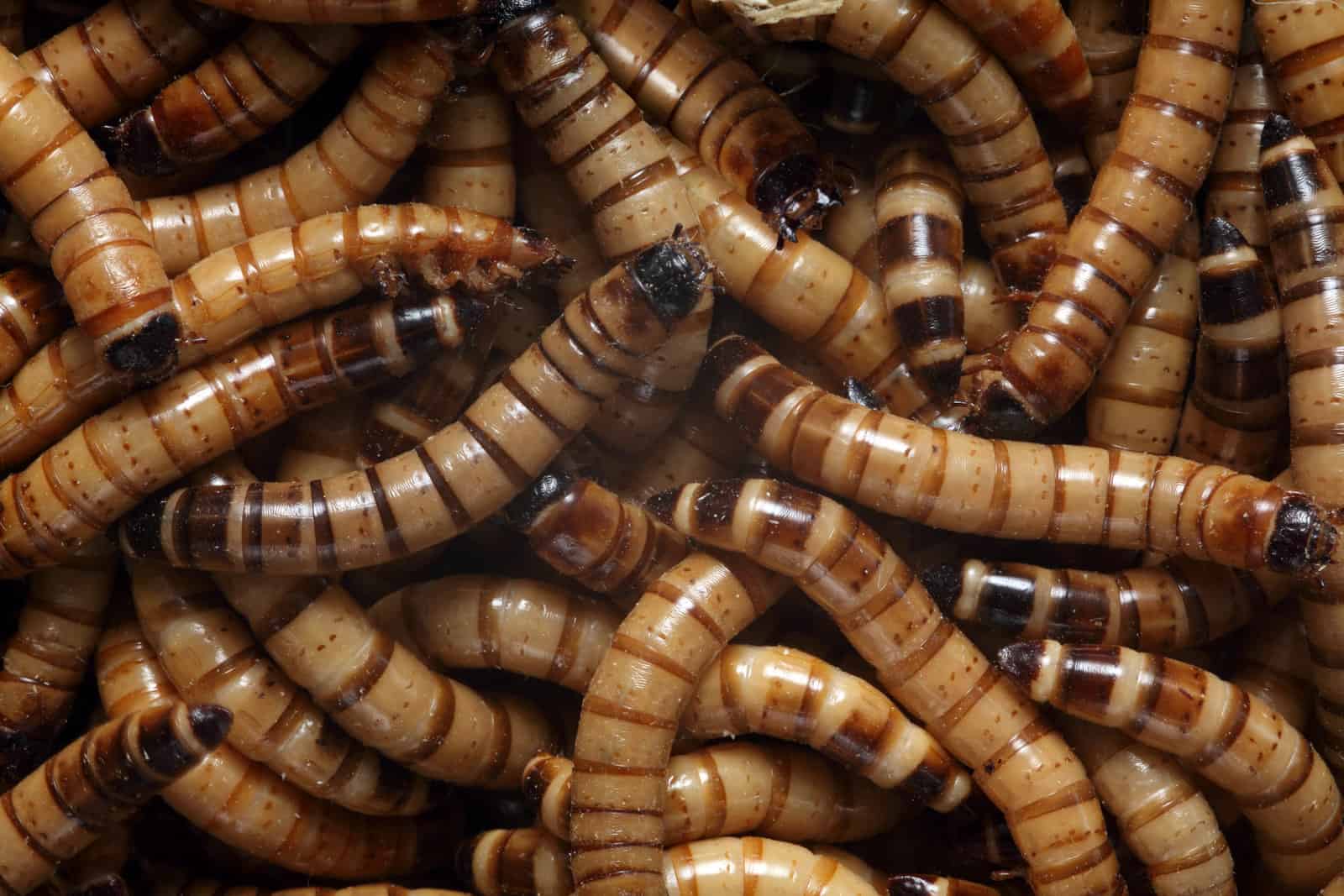 Superworms are not real worms but larvae of a darkling beetle, Zoophobas morio. These beetles are native to Central and South America. They produce large, cylindrical, brown-orange larvae we know as superworms, king worms, or morio worms.

For decades, superworms have been bred in captivity to use as a quality live food source for reptiles, birds, fish, and other animals.

Recently, superworms have been studied as an alternative source of protein for cattle and humans, as well as agents of waste processing – it has been discovered that they can digest and live off plastic waste such as polystyrene (and yes, they can bite through thin plastic boxes that they’re usually bought in!).

What about feeding superworms to leopard geckos?

Here’s pretty much everything you need to know!

How Nutritious Are Superworms?

As for essential nutrients, researchers have found that superworms contain relatively high amounts of all essential amino acids except methionine, vitamins, and minerals such as phosphorus, calcium, magnesium, iron, zinc, and copper.

Superworms are great food for leos – in fact, they can be one of the regular items in your gecko’s diet.

However, superworms are far from perfect. Besides the poor calcium-to-phosphorus ratio characteristic for nearly all feeder insects, there are some specific issues with superworms.

Is It Dangerous to Feed Superworms to Leopard Geckos?

Supwerworms are not dangerous to feed to your leos if you do it properly. And for the proper use, you have to learn their downsides as feeders: the high-fat content, the large size, hard shells (exoskeletons), and strong nibbling jaws.

Let’s elaborate on these a bit.

However, you can sort of neutralize all of these potential dangers – read about my experience with superworms a bit below.

Can Superworms Bite Through a Gecko’s Stomach?

An urban legend says that superworms can bite through the lizard’s stomach and chew their way out to freedom. If you heard that, you might wonder, “Can superworms kill my beloved pet?”

The idea is precisely what I said it was – an urban legend. Luckily, the leo’s lacerating jaws, strong muscles, and burning stomach acid quickly disable the prey once swallowed.

However, I can’t exclude the possibility that a superworm can give a nasty nip before being completely subdued. While usually not dangerous, the bite can be painful for your lizard. In rare cases, it can lead to infection.

My Experience With Feeding Superworms to Leos

A few times after eating an entire large super worm, my leos’ mealtime enthusiasm decreased. They would bounce back after a couple of days, but the change in appetite was unsettling and not to ignore.

Also, I once found a battered-looking dead superworm in the tank, possibly expelled by one of my leos by vomiting.

Things like that never happened with mealworms or roaches, even if they eat plenty, so the whole thing got me worried.

While I’ll never know the exact cause of my leos’ seeming discomfort after gulping down a whole superworm, I decided not to take any chances with potential problems such as indigestion, impaction, or injury.

Instead of offering a full-size, alive-and-kicking superworm as a meal, I implemented several steps prior to feeding.

Note that I mostly hand-feed my leos with tweezers. Offering cut-up superworms from a dish is unlikely to be successful.

I will not lie to you – there is no elegant and absolutely humane way to cut a living creature into pieces, even if it is “just” an insect larva.

Leos need either alive or freshly killed food – very few individuals will accept dead food items – so the prey has to be offered fresh and moving.

We still don’t know if insects feel pain and what it might look like. We know that they instinctively get away from damaging stimuli. However, their nervous systems are much different than ours, so it is almost certain that it is different.

However, you can do some things to make it probably less painful for the bug and less gross for yourself. Since we’re talking about really simple steps, I believe it’s our duty to decrease the suffering, even if we’re just assuming it may help.

Safety note: If you are a child, never use the sharp blade yourself. If your adults are too squeamish to do it (or if you are the squeamish adults), perhaps it is better to opt for the less complicated feeder insects – e.g., mealworms.

This brings us to the next question. 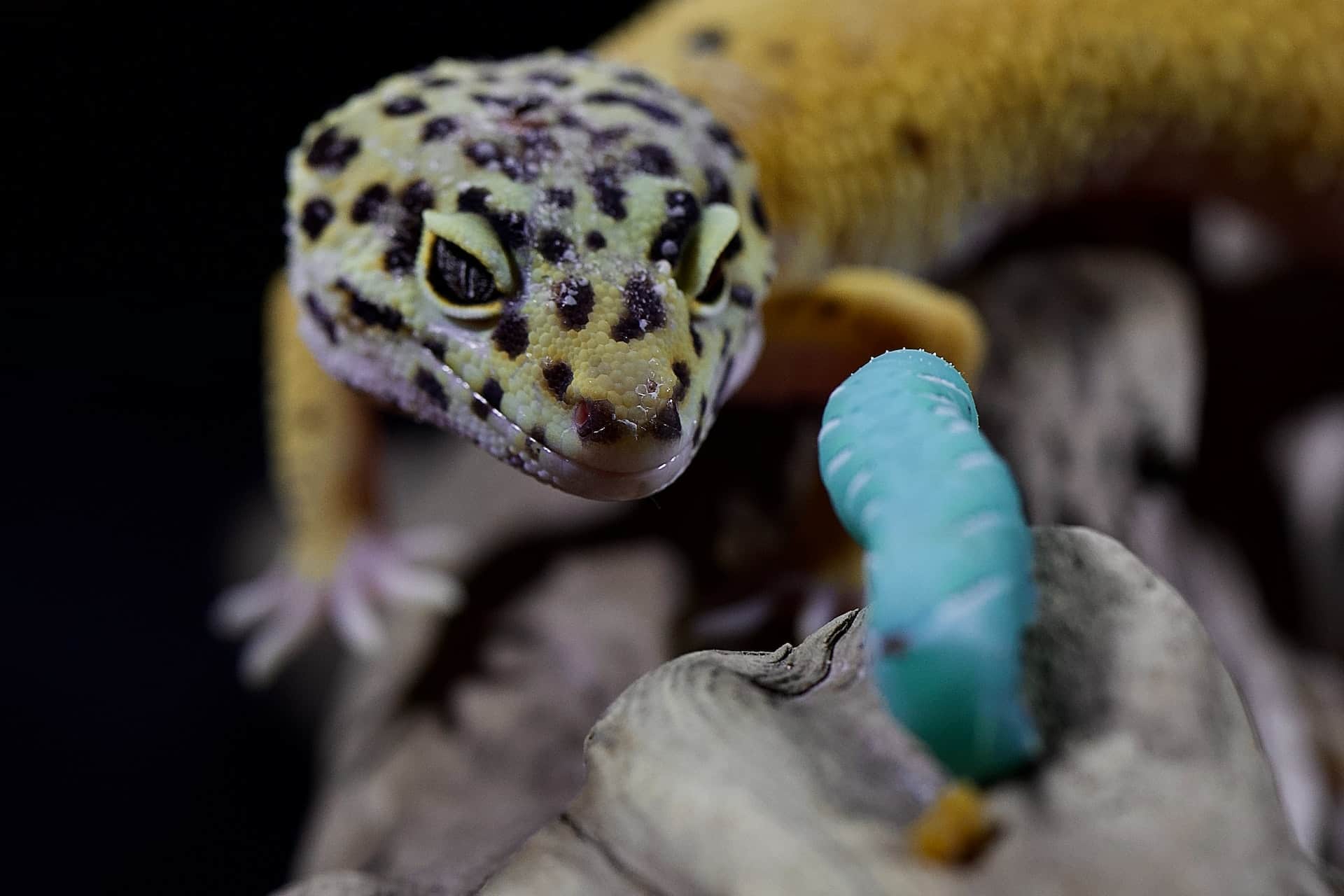 At some point in the history of reptile keeping, mealworms acquired a bad rap as a low-protein, high-fat, barely-digestible, non-nutritions food source.

Despite being very similar to mealworms, superworms somehow got left out of the discussion (is it because they were super?).

However, the truth is that mealworms are not so bad when reptiles are given a variety of food, and – important for this article – the comparative analysis shows the difference between mealworms and superworms is not significant at all.

Some distinctions between the two are:

Is It Easier To Keep Superworms or Mealworms?

In my experience, mealworms are definitely easier to breed since they require no intervention other than feeding and cleaning (changing the bedding). A healthy colony will practically replenish itself. Also, you can refrigerate a part of your colony if the lifecycle is going too fast (e.g., because of high summer temperatures).

Superworms are just as easy to maintain, but larvae need your help to pupate. You need to take well-fed, mature worms and put them in separate boxes/containers with no food or water – the isolation triggers the metamorphosis. The trait is practical since you’ll have the larval stage for a long time, but it requires a bit of additional work and space.

Also, superworms have superior appetites and will eat anything, making them easier to gutload.

Perhaps not the most important note, but to me, superworms are definitely cooler to watch. They are like extra pets. The beetles are larger and more attractive, and, unlike the frantic little mealworm beetles, they are chill – slow-moving and calmer. My friend who used to breed them stated that their demeanor is “like they’re some sort of intelligent aliens.” I still find it funny because it sounds so true!

How To Grow Superworms At Home

As hinted, growing superworms at home is quite easy.

Here are a few basic steps:

How Often Should I Feed My Superworms?

Your superworms will practically live in their main food – the wheat or oat product of your choice. If you are feeding them in a tray, check on it daily; refill as soon as it’s spent and/or full of frass.

Also, some moist food (a piece of fruit or veggie) should always be in their enclosure. Left with no fresh food, the thirsty superworms will start cannibalizing each other quickly (yikes!).

Replace a piece of fruit or a veggie every couple of days or at the first signs of moldiness. Feel free to provide a variety of food for your superworms, but avoid citrus fruits or other soft items as they tend to go bad quickly.

Pro tip: One superworm nutritional study found that feeding the larvae with a diet of cabbage, carrot, and flaxseed provided the best nutritive profile: after 104 days of rearing, the superworms contained 39.52% of protein, 32% crude fat, 44.01% essential amino acids, 65.21 mg of Calcium and 651.15 mg of Phosphorus (per 100g), plus a favorable Omega 6 / Omega 3 fatty acid ratio of 1.5. Wow!

Do Superworms Need To Be Gut-Loaded?

Even though they’re quite rich in nutrients, superworms still need to be gut-loaded and dusted to ensure your leos get enough vital vitamins and minerals.

Just to remind you, gut loading means feeding (loading the guts of) the insect feeders with nutrient-packed food 24-48 hours before delivering it to your reptile. Since your leo will ingest whatever is in the insect’s stomach, it will directly benefit from the extra nutrients.

Luckily, the superworms are ideal insects to gut load. Unlike the less active and less gluttonous mealworms, superworms have voracious appetites at all times.

Also, mealworms tend to enter a state of total inactivity before pupating – and they pupate whenever they feel like it. Superworms pupate only after being isolated, so in regular circumstances, you can count that they’ll always be ready to eat whatever you offer them.

Here are some ideas on nutrient-dense foods you can offer your superworms for gut-loading.

Besides gut-loading, always dust your feeders with vitamin and mineral supplements. That especially goes for calcium since superworms have more phosphorus than calcium; in the long run, that would cause an imbalance and a calcium deficiency (the same is true for all regular feeders, except for the black soldier fly larvae).

How many super worms should I feed my leopard gecko?

How many superworms you feed to your leo depends on the superworm’s size.

If you have small, mealworm-sized superworms, offer 4-5 per feeding.

However, even if you have small worms, they will grow fast. Soon enough, you’ll end up with full-size superworms that may be too much for your leo to handle.

I offer my leos 2-3 full-size superworms cut into pieces.

Although they’re not as fatty as waxworms, some reptile owners use superworms only as a treat due to their high-fat content. In any case, alternate with less fatty insects like crickets and dubia roaches. 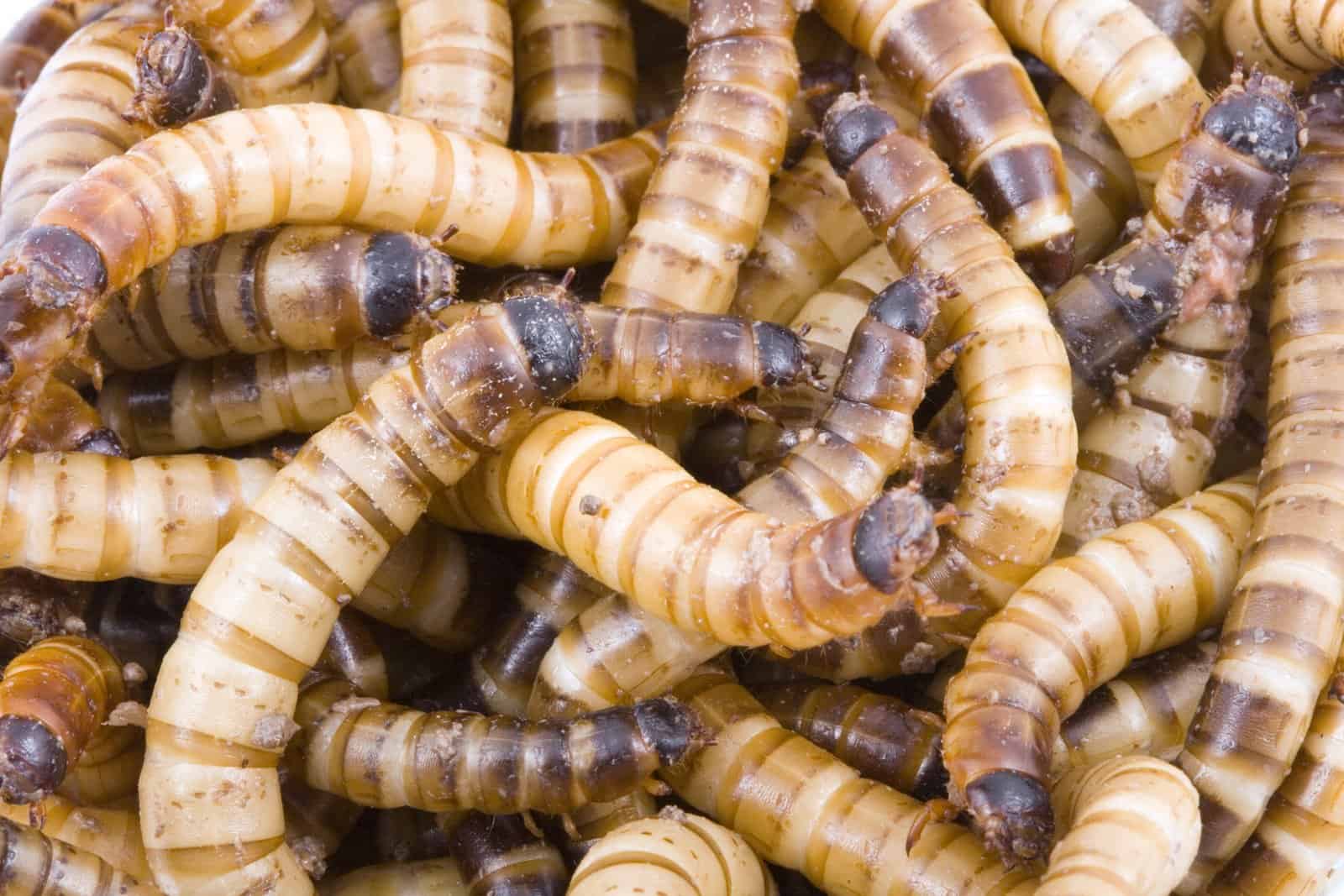 Can I Refrigerate Superworms (the Same Way as Mealworms)?

Unlike mealworms, superworms cannot be refrigerated to prevent them from growing or avoid caring for them. They’ll die if you refrigerate them or expose them to low temperatures.

The reason superworms take cool temperatures poorly is that they are tropical insects and have not evolved to withstand low temperatures.

Superworms can be an excellent addition to a leopard gecko diet for several reasons.

Yet, there are superworm cons as well.

Still, superworms are definitely a distinct prey item that adds to the much-needed variety of the captive diet.

So, when feeding your leos superworms, use common sense.

This article offered a wide range of advice – from what to feed your worms to make them extra nutritions to suggestions on how to safely serve them (and how much). I certainly hope that it will help you keep your superworms plump and your leos happy!

If you found the article super-useful, feel free to share it around.

Also, if you have doubts or your rich experience is bubbling under, don’t be shy and leave a super-comment!