Bowel impaction is a potentially fatal health condition in leopard gecko and other reptiles. Find out how to prevent it and treat it. 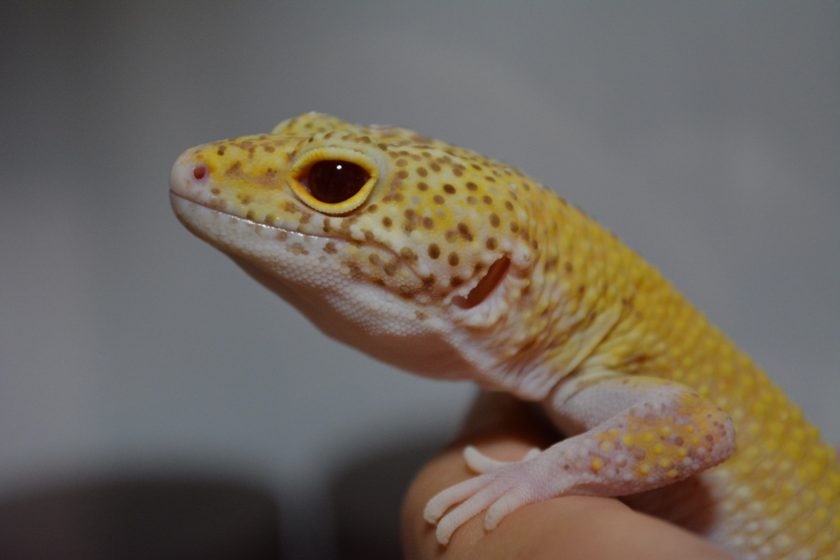 Leopard gecko is considered an ideal beginner pet reptile. One of the reasons is that leos are hardy and it is relatively simple to keep them top health.

However, did you know that there is one preventable, but potentially deadly leopard gecko health issue that remains commonly seen in the leopard gecko community?

Bowel impaction is a condition that occurs when a fecal mass, or indigestible material, blocks the lizard’s tiny bowels. If the impaction is not treated, the entire digestive system collapses, leading to organ failure and, eventually, death.

The best way to cure impaction is to make sure it doesn’t happen. If it still does occur, it is crucial to know how to recognize it and subsequently treat it, efficiently and safely. The good news is you can avoid impaction by providing proper leo husbandry.

Causes of impaction can be many:

Can Sand Substrate Cause Impaction in Leopard Geckos?

One of the most common causes of impaction is the use of sand as a substrate in a leo tank. Guided by the misconception that leopard geckos are desert creatures, pet shop personnel and uneducated breeders have recommended sand as a natural substrate for years. That resulted in a significant number of unnecessary vet interventions leo deaths.

The use of calcium sand is particularly tricky. Leopard geckos, and especially those who are calcium deficient, will be tempted to consume the larger-than-usual amounts of the substrate if they sense it contains calcium. Although calcium sand is labeled as digestible, it often clumps together when wet – and that’s precisely what can happen inside your pet’s bowels.

I acknowledge that some people keep leos on sand and that their pets remain healthy. However, the risk is still too high, especially since there are many suitable alternatives. Leos originate from predominantly rocky and not sandy areas anyway.

Substrates And Impaction – A Deeper Perspective

Why do some geckos get impacted by sand while others do not? The answer may lie in a hidden health condition. For example, leopard geckos with vitamin and mineral deficiencies may try to make up for the missing nutrients by consuming the substrate.

Also, low tank temperatures can lead to impaired digestion, causing the amount of substrate that would otherwise be passed normally to create a blockage.

While you may think, “My gecko is in perfect health, so why not keep him on sand?”, the truth is that we can never know if our pet’s health is going to be jeopardized for any reason. That makes sand – or other hard, loose substrate – an accident waiting to happen.

If your leo survived through substrate impaction, examine what could be the underlying cause of his need to consume large amounts of the substrate (but ditch the substrate anyway). 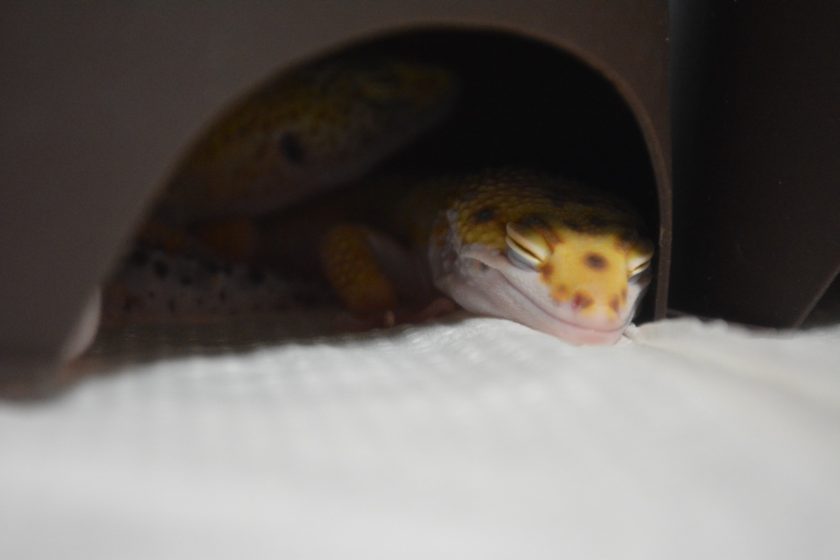 Is My Leopard Gecko Safe If I Use Paper Towels Instead of a Substrate?

The truth is your leo will be much safer if you use paper towels, but still not 100% safe.

Freakish cases of impaction – from paper towel pieces, eco earth, or peat moss are rare, but have occurred! We have to be mindful and not exclude the possibility of impaction simply because we have the right substrate.

The substrate that is the least prone to causing bowel impaction is slate or ceramic tile. It looks and feels quite natural too.

Can Mealworms Cause Impaction?

The opinions on mealworms and impaction continue to be divided. While some people in the hobby still strongly advise against mealworms due to their hard exoskeletons, enthusiasts like the legendary Ron Temper have been using mealworms as a staple diet for his leos for decades.

I never had issues with feeding mealworms. If your leo has no underlying health issues, and you have proper temperatures in the tank, he should be able to eat them safely. Size is the key – never give your leo mealworms that are too large from him. A mealworm that takes more than three bites to swallow is probably too large for your leo.

On the other hand, you should never give your leo mealworm beetles or any other beetle species. Their hard shells undoubtedly increase the risk of impaction.

Symptoms: How Do I Know If My Leopard Gecko Has Impaction?

The first and most apparent sign of impaction is constipation. It is essential to clean your leo’s potty corner daily, so you can track if he is passing his stools.

Lack of appetite usually goes hand in hand with constipation. Since his bowels are not functioning, leo will be reluctant to take in any new food.

As impaction continues, emaciation and bloating take place. The dark spot on the underside of the belly is another sign of persistent impaction. However, a dark patch on the abdomen can appear for other reasons too – enlarged liver, for example, so this single symptom doesn’t automatically mean impaction.

There are a couple of first-line home treatments for impaction. If they fail, head for the reptile vet’s office ASAP.

Giving your leo a warm bath is the first line of treatment when you suspect impaction. Baths are comfortable, pretty stress-free, and surprisingly efficient in solving uncomplicated cases of impaction.

Here is how to do it: 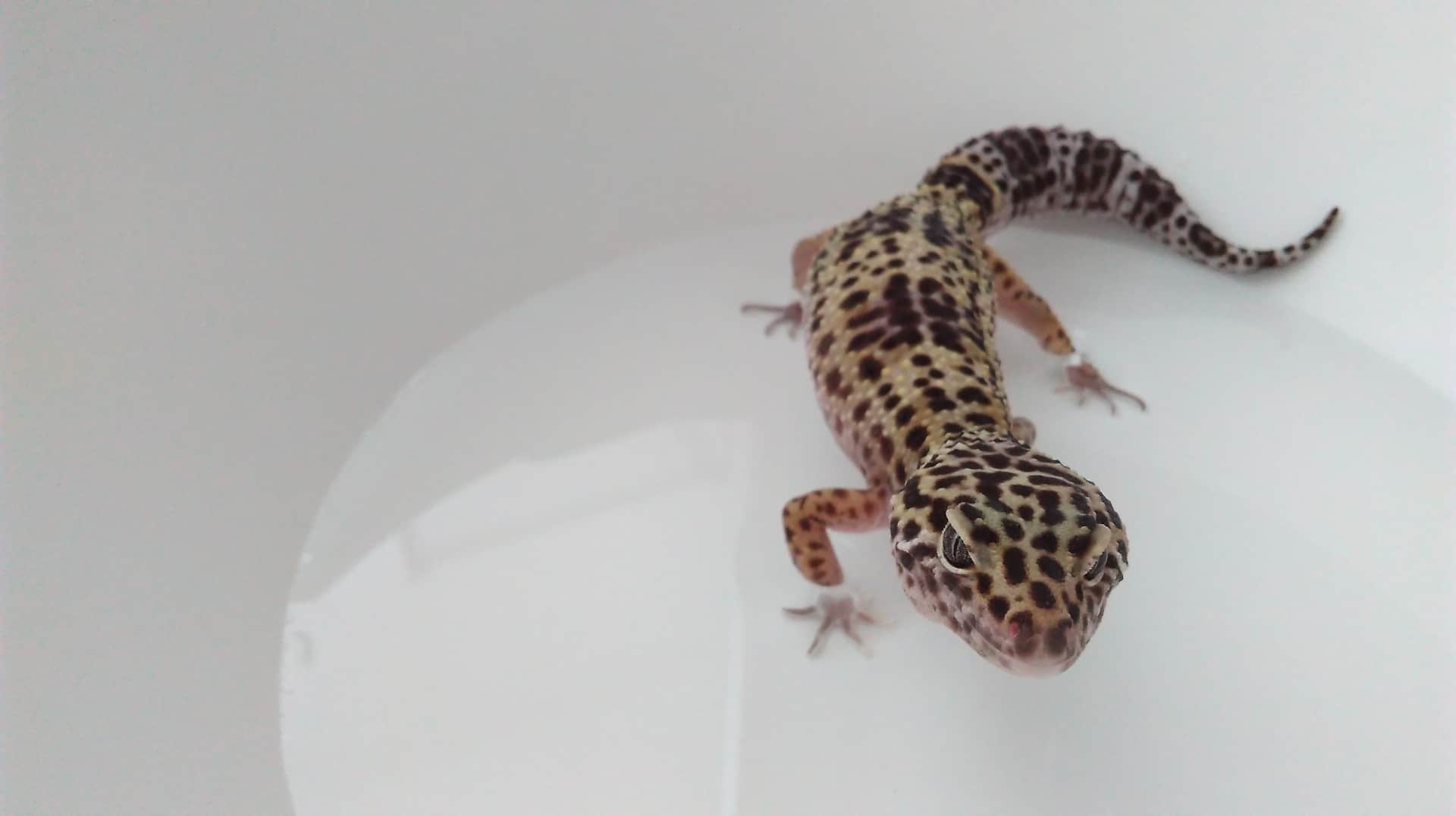 Another home remedy for impaction is giving your leo a drop of olive oil, or mineral oil. Oil won’t harm your leo as long as you administer it carefully and take care it doesn’t get into his nostrils. Put an oily drop in front of his mouth, lightly touching them. He will most likely lick off the droplet. You can use this remedy together with baths.

I advise using oil only coupled with the baths, and not after the bating method has failed. There is anything particularly risky about the oil itself. Still, if the bathing has failed, it is highly likely that impaction is severe and that your pet needs urgent veterinary care. In a situation like that, you don’t want to waste precious time to see if another light technique will work. Time can make a difference between life and death.

If the home remedies fail, you have to take your leo to an experienced reptile vet.

At the vet’s, the impacted leo will probably get an X-ray so the doctor can see what’s going on in his belly. After that, the vet will prescribe a laxative (usually the one used for cats, or medical paraffine), try to flush out the impaction using the procedure called enema, or proceed to do a surgery.

I hope this article has helped you gain an in-depth perspective on bowel impaction in leopard geckos. I wholeheartedly hope that you won’t ever need to use my advice on the topic. However, considering that impaction is still common and deadly, every leopard gecko owner should know how to prevent it and treat it.

Has your leo had a case of bowel impaction? How did you treat it? Help other reptile enthusiasts by sharing your experience in the comments.

18 thoughts on “Causes And Treatments for Leopard Gecko Impaction”