Crested geckos are one of the very best lizards for new keepers. They have a varied diet, they are hardy and can adapt to many different types of enclosures.
Find out more in our crested gecko care sheet. 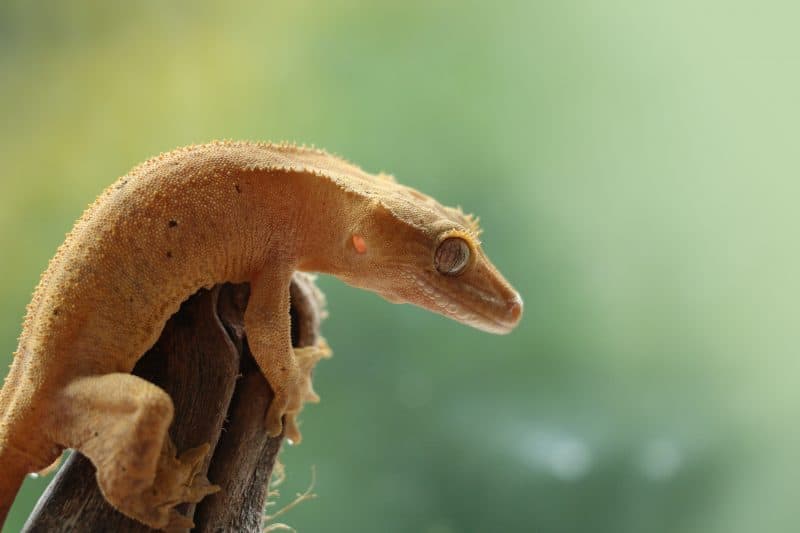 I spent a lot of time selling reptiles to beginning keepers in the late 90s. I usually encouraged fledgling keepers to select species that were easy to care for – most commonly, I’d recommend leopard geckos.

But unfortunately, they weren’t always an easy sell. Often, the prospective keeper would end up selecting a green iguana or some other diurnal herbivore. There are certainly plenty of things to like about these lizards, but they also present several challenges. Most require elaborate and expensive lighting systems, and their diets are tricky to balance.

But then I stumbled across my first crested gecko (Correlophus ciliatus) at a local reptile expo. I chatted with the seller while peering at the cute little gecko clinging to the walls of his tank.

As he explained their care regimen, it dawned on me that these lizards may end up being one of the very best lizards for new keepers. They may even replace leopard geckos as my default recommendation. Keep reading and I’ll explain why these lizards are an excellent choice for beginners and what you’ll need to do to maintain one of your own.

Before we discuss the biology, behavior and care requirements of crested geckos in detail. Let’s take a moment to appreciate a few neat facts about these critters. 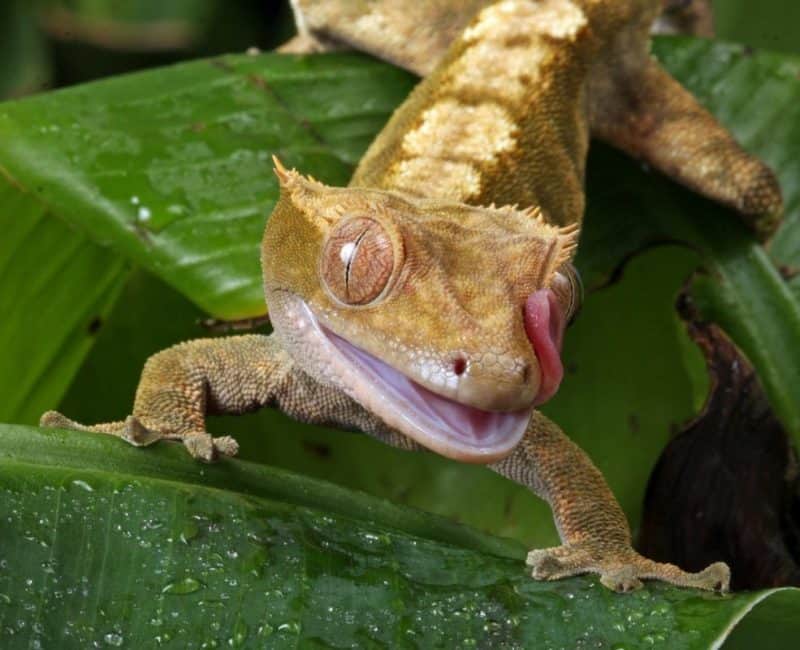 Generally speaking, crested geckos are built like most other geckos. They have four muscular limbs, a large head, and a long tail. However, there are also a few distinctive features that differ from those of other species.

For example, crested geckos have moderately baggy skin has a slightly different texture from the skin of many other gecko species. They also occur in several different color forms, ranging from red to yellow to black, and they may or may not have a conspicuous pattern of dark markings too.

However, the most notable aspect of a crested gecko’s anatomy is surely the ridge of fringe-like scales found on each side of their body. The ridge starts above the eye on each side of the face and continues along the side of the back until it merges with the fringe from the opposite side near the tail base.

These scales are not only the inspiration for the species’ common name but their scientific name too: “Ciliatus” refers to the scale’s resemblance to the cilia sometimes seen on single-celled organisms.

Although it isn’t possible to distinguish the sex of young crested geckos, it becomes relatively easy to do so once they reach 3 to 5 months of age. Simply look for two bulges created by the lizard’s hemipenes located near the base of the tail to identify males. Females have no such bulges.

Additionally, males have a set of prominent preanal pores near their vents.

Size & Weight: How Big Do Crested Geckos Get?

Crested geckos are medium-sized geckos. They reach about 8 inches in total length, with half of this length being comprised of the tail.

Upon reaching maturity, most crested geckos weigh between 25 and 50 grams. Males are usually considered mature and capable of breeding at around 25 grams, but females may not successfully reproduce until reaching 35 grams or more.

Crested geckos have only been kept in captivity for about 25 years, so a typical lifespan has yet to be established with any certainty. Nevertheless, they are clearly a long-lived species, who can likely live for 20 years or more.

Nevertheless, the average lifespan of these lizards is probably somewhere in the neighborhood of 10 to 15 years. 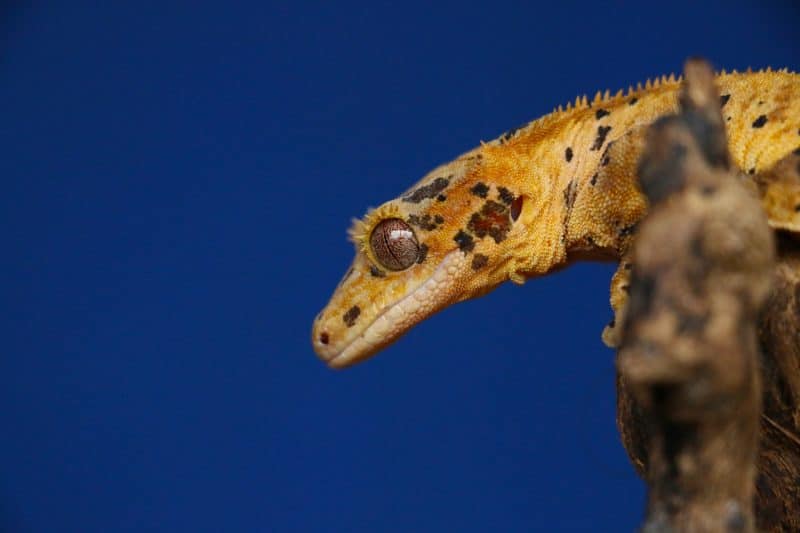 Crested geckos are hardy lizards, who aren’t predisposed to many health problems. However, improper care can lead to a variety of illnesses. We discuss these in greater detail in our Complete Health & Behavior article, but we’ll summarize the key points below.

Crested geckos are omnivorous lizards. This means that they subsist on a combination of plant- and animal-based foods. Insects and small spiders form the bulk of the animal-protein they consume, but large individuals may eat small lizards or frogs from time to time. Fallen fruits and flower nectar make up the plant-based portion of their diet.

It’s usually easy to provide a captive diet that mimics that of wild-living crested geckos. Most keepers do so by providing a combination of commercially produced crested gecko food and live insects.

Commercially produced foods usually come in powdered form. You simply need to add a bit of water to the powder, stir it until it reaches a pasty consistency and then offer it to your pet. Historically, crested gecko keepers would feed fruit-flavored baby foods to their lizards, but this is a bad idea. Baby food is formulated to meet the needs of humans, not geckos. Accordingly, it can cause health problems if fed to crested geckos over the long-term.

Crickets, small roaches, and silkworms are some of the best insects to feed crested geckos. Just be sure that you offer your pet insects that are no longer than the distance between your pet’s eyes. This will help prevent impactions, which occasionally prove fatal. 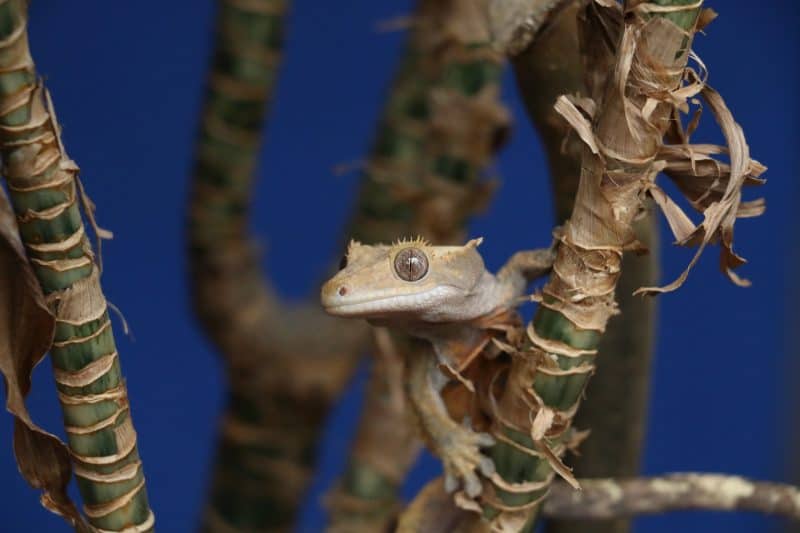 Crested geckos can thrive in a variety of different types of enclosures. Aquaria and other types of glass enclosures will work, but front-opening, plastic enclosures are usually preferable. Not only do plastic habitats help give your lizard more privacy (which will help keep his stress level low), but they’re also lighter and less likely to break.

Keepers use habitats of varying sizes when maintaining crested geckos. Most probably use habitats that are 18- to 24-inches tall and provide about 1- to 2-square feet of floor space. However, this should be considered the minimum size required, and larger habitats are almost always preferable.

You’ll need to add a suitable substrate to the habitat and plenty of furniture that allows your gecko to climb and hide as necessary. Paper towels, newsprint, cypress mulch, and orchid bark are all effective substrates, though each offers different benefits and drawbacks. Real or fake branches and plants will provide climbing and hiding opportunities, although some keepers simply add several sheets of egg carton to the habitat.

Crested geckos don’t require any type of specialized lighting – the ambient lighting from your room will be adequate.

However, you can use fluorescent bulbs to bring out your pet’s colors and make the vivarium come to life. Just be sure to use a low-watt light to avoid overheating the habitat.

Crested geckos thrive in temperatures between about 68- and 80-degrees Fahrenheit. Accordingly, heating devices are usually unnecessary. If you do need to use a heating device, be sure to place it at one end of the enclosure to provide a range of temperatures inside the habitat.

The care requirements for young crested geckos are similar to those of adults. They require an enclosure with plenty of climbing and hiding opportunities, and they need the habitat to be in the low- to mid-70s. They also need a high humidity level to prevent dehydration and poor sheds.

However, you’ll usually want to provide hatchlings with a relatively small habitat. This will not only make it easier for your pets to catch their insect prey, but it’ll also be easier to keep the humidity level high enough. Make sure that you provide your young pet with suitably small insects, as young crested geckos will often attempt to swallow prey that is too large. As with the adults, make sure any insects you offer are shorter than the length between your lizard’s eyes.

Don’t handle your young gecko very much until it is nearly full-grown. Young crested geckos are often quite flighty, which can lead them to leap from your hand. Additionally, young crested geckos will often shed their tails at the slightest touch.

Adult crested geckos are usually best kept singly outside of breeding attempts, but you can keep two or three hatchlings together in a single habitat.

Price: How Much Do Crested Geckos Cost?

The price of a given crested gecko can vary pretty significantly. You may be able to find crested geckos for as little as $30 or $40, but you could easily pay 10 times as much for a top-of-the-line specimen.

Crested geckos are a polymorphic species, meaning that they can display several different colors or patterns. And although crested geckos of any color can make a good pet, the relative rarity of a gecko’s color and pattern will play a large roll in the lizard’s cost. Geckos displaying common colors and patterns are generally relatively affordable, while individuals who display unique or rare color patterns often cost much more.

Age and sex also influence the cost of crested geckos. Hatchlings are generally much cheaper than older juveniles or adults are because the breeder or retailer has had to spend more money caring for older individuals than they do to care for hatchlings. And because breeders often want as many females as they can get their hands on, males are more common in the marketplace, and therefore cheaper. 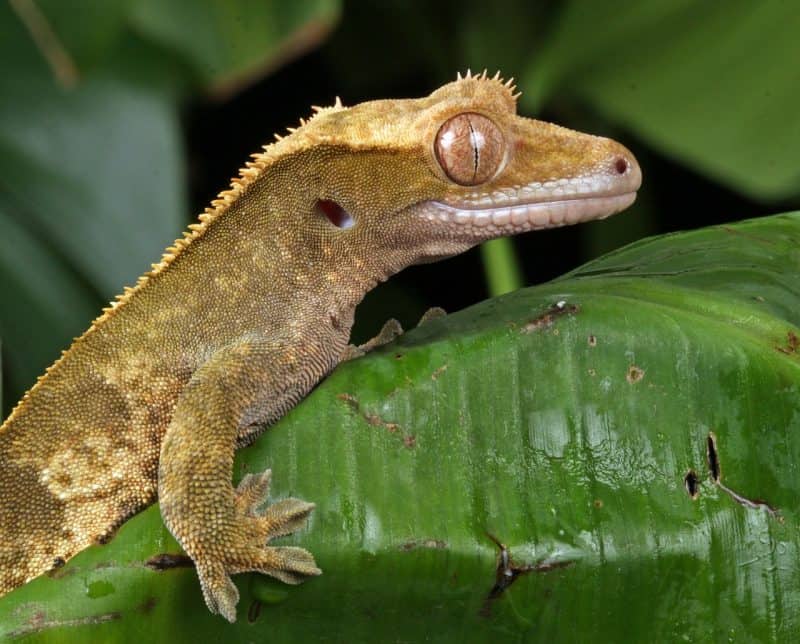 A lot of reptiles can make great pets, but few have as many things going for them as crested geckos. They’re not only hardy animals who can usually endure the mistakes keepers often make, but they also have simpler care requirements than many other herps do. Simply put, they’re some of the easiest reptiles to care for and they are ideally suited for beginning keepers.

This doesn’t mean that crested gecko ownership is something to be taken lightly. You’ll still need to provide your new crested gecko with a proper habitat, diet, and care regimen. But most owners will surely agree that crested geckos are some of the best captives a reptile-lover could want.

Be sure to share this article with your friends if you’ve found it helpful. Crested geckos deserve plenty of attention by reptile enthusiasts, so do your part to spread awareness of these magnificent lizards.