Corn Snake Habitat: What Is the Ideal Tank Setup?

The habitat needs of different snake species vary considerably. Some require elaborate habitat designs and copious amounts of space, which most hobbyists are unable to provide. But other species – such as the corn snake – are fairly easy to house, as they don’t require anything complicated nor especially large.

We’ll explain everything you need to know to provide your corn snake with a suitable habitat below. 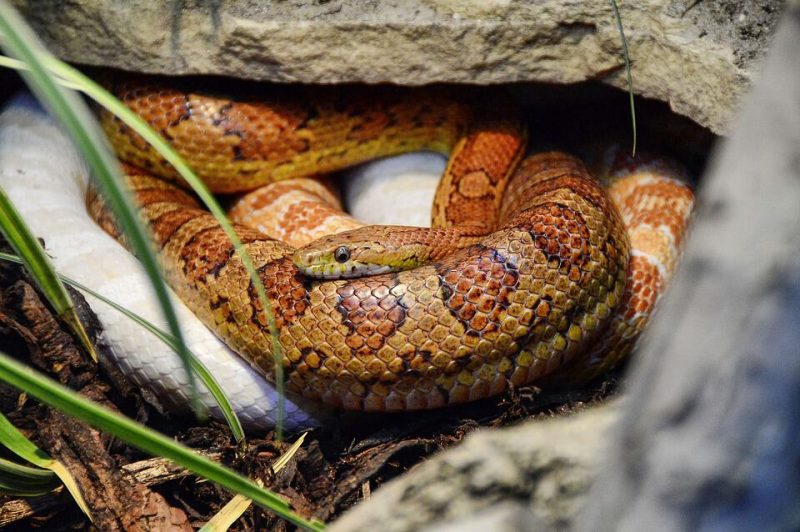 Providing the proper habitat for your new pet corn snake is one of the most important things you’ll do as a keeper. Your snake’s habitat effectively becomes his entire world. Many of the health problems that afflict captive snakes can be traced back to improper habitat design and maintenance, so it is imperative that you acquire the proper enclosure and set in up in a sensible manner.

One of the neat things about corn snakes is their ability to thrive in either utilitarian or natural-looking habitats.

You can maintain your pet in a spartan, relatively “sterile” habitat, or you can decorate it so that it looks like a small version of the corn snake’s natural habitat. In fact, many keepers who’ve maintained public corn snake exhibits (including yours truly) have set up corn snake habitats that mimic the forests, wetlands and farms in which these snakes thrive.

Wild corn snakes are primarily confined to the southeastern United States. Their range essentially covers the area stretching from Louisiana to North Carolina, and scattered pockets of corn snakes can be found as far north as New Jersey. Corn snakes are even found living in the Florida Keys.

Within this range, corn snakes inhabit several different types of habitats. Historically, corn snakes were likely most common in the hardwood, pine, and mixed forests of the southeast, and some individuals undoubtedly inhabited fields and wetlands too. Once humans began altering the North American landscape, corn snakes also began living in the farms they created.

Modern corn snakes inhabit the same types of forests, fields and wetlands they always have, and they’ve also managed to populate farms and other disturbed areas, ranging from backyards to gardens to vacant lots.

However, these should represent the minimal requirements – you can always provide your snake with a larger habitat if you like. Some advanced keepers report that large habitats can make snakes feel insecure, but this is simply incorrect. It is true that large empty habitats may make snakes feel nervous or exposed, but they’ll feel completely at ease in complex habitats with plenty of visual barriers and hiding spaces.

Corn snakes don’t necessarily need habitats that provide a great deal of vertical height, but because they are avid climbers, it is often helpful to do so. 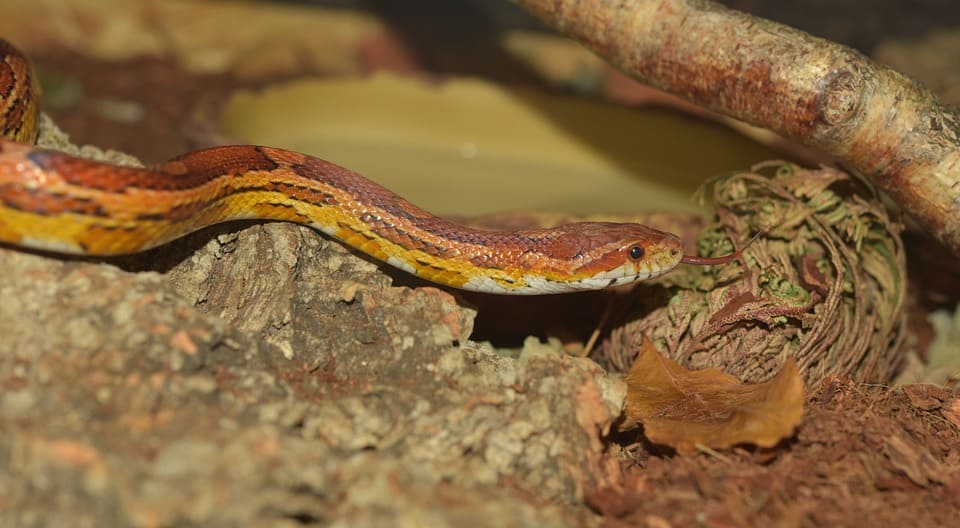 Heating and Temperature Range for Your Corn Snake Enclosure

Corn snakes are ectothermic animals, whose body temperature fluctuates with the ambient temperatures. This means that you must manage the temperatures in your pet’s habitat carefully.

The best way to do so is by establishing a thermal gradient. This means that the habitat should provide your snake with a range of temperatures – this way your snake can move around the habitat to adjust his body temperature.

Creating a thermal gradient is pretty easy; you simply need to place the heating device at one end of the enclosure. The spot closest to the heating device becomes the basking spot, while the far side of the habitat will then serve as a cool retreat, which your snake can use when he needs to cool off.

Heat lamps are typically the best heating devices for beginners, but you can also use heat pads, heat tape or radiant heat panels. Just be sure that you invest in a good digital thermometer so that you can monitor the temperatures carefully. Place the thermometer at one end of the enclosure and position the remote probe (if present) at the opposite side of the habitat.

Shoot for a basking spot temperature of about 90 degrees Fahrenheit. The temperature should fall with increasing distance from the basking spot, with the cool side of the habitat remaining in the low- to mid-70s. It isn’t always possible to achieve such a drastic gradient in small habitats, but this should be your goal.

It is generally wise to turn the heating devices off at night, to mimic the temperature drop that occurs outdoors. Just be sure that your pet’s habitat doesn’t drop below the mid- to high-60s. If it does, you’ll need to add a nocturnal, light-free heating device to the habitat to prevent your pet from falling ill.

Temperature isn’t the only thing you need to monitor for your pet corn snake – you must also monitor the humidity level in the habitat. Fortunately, corn snakes will tolerate a fairly wide range of humidity levels, unlike some other snakes, which have fairly specific humidity requirements.

As a ball-park figure, shoot for a humidity level in the 50% to 70% range. If you keep the habitat much drier than this, your snake will likely have trouble shedding properly; keep it wetter than this, and your snake may develop bacterial and fungal infections.

There are several ways to raise the humidity level of your corn snake’s habitat (because of the presence of the heat lamp, it’ll rarely be necessary to reduce the habitat humidity in practice). You can use a moisture-retaining substrate and dampen it periodically, or you can simply provide a larger water dish. You can also mist the habitat regularly or reduce the amount of ventilation (carefully) to increase the relative humidity.

Another approach that is often helpful is to provide your snake with a moist retreat. This is essentially a hide box that’s kept slightly damp by keeping a layer of moistened moss or wood chips inside. This gives the snake a chance to rest in a high-humidity environment when necessary, without forcing them to remain in a damp habitat at all times. 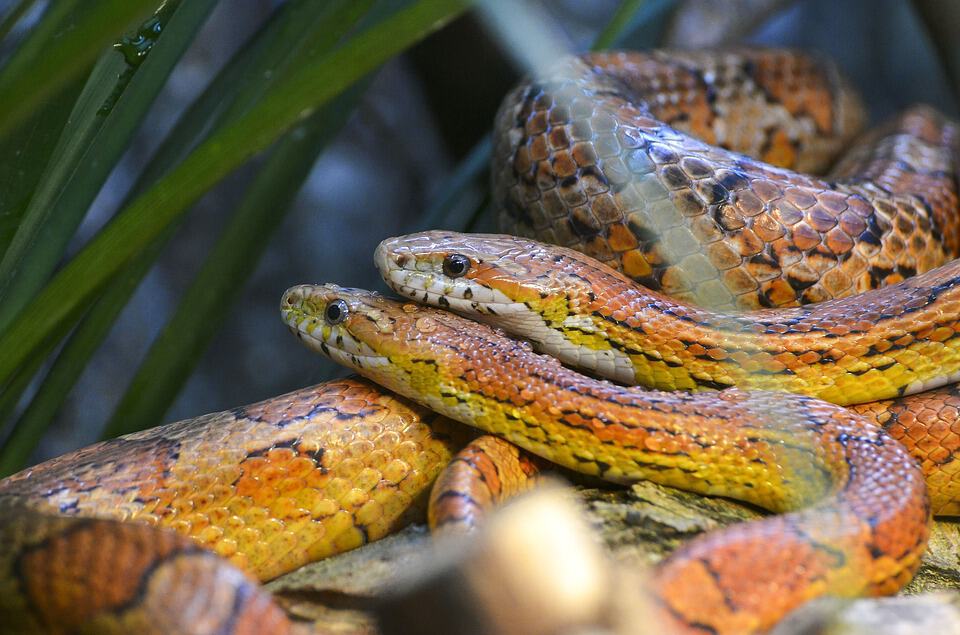 What Is the Best Corn Snake Bedding?

There are a variety of different beddings you can use for your snake’s habitat. Some of the best include:

We’ve discussed most of the things you’ll need for your corn snake’s habitat in the preceding sections, but we’ll run them down one more time to make it easier for you to pick up everything you need. 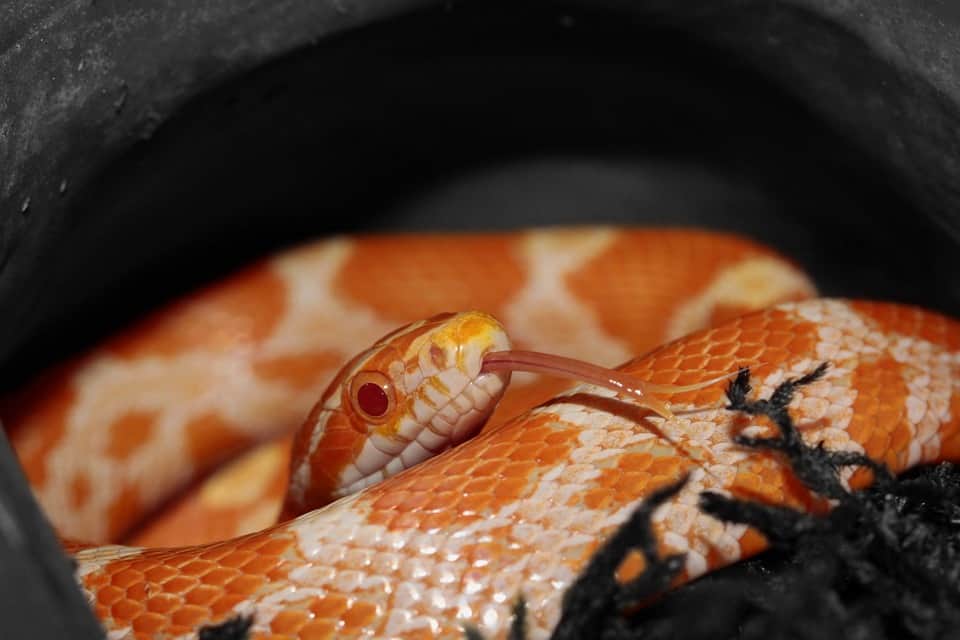 Remember: A Proper Corn Snake Habitat Is Critical for Success

Your corn snake’s habitat becomes his world, so make sure that you do everything possible to provide him with the best enclosure you can. Just heed the advice presented above and be sure to think about things from your snake’s point of view. This will help ensure your snake enjoys the enclosure and give him the best chance of living a long, healthy life.

42 thoughts on “Corn Snake Habitat: What Is the Ideal Tank Setup?”