Widely hailed as some of the best reptile pets in the world, corn snakes (Pantherophis guttatus) are ideal captives for beginners and advanced hobbyists alike. We’ll explain some of the things that make corn snakes so well suited for captivity and the things you’ll need to do to take care of your very own snake below in our corn snake care guide. 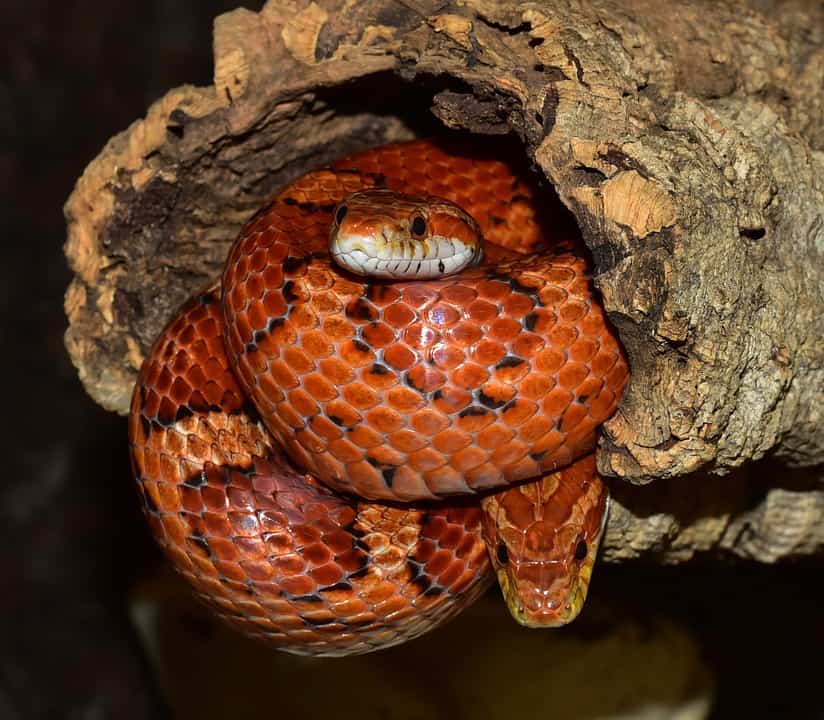 Although I’ve always been slightly more partial to Indo-Australian pythons, I’ve maintained a handful of corn snakes over the years, primarily as ambassadors to the public that I’d use during live animal presentations.

Without exception, they’ve all made fantastic captives, and I enjoyed maintaining each and every one. They’re not only easy to care for. But they’re quite attractive, and they tolerate human interaction as well as any species I’ve had the chance to work with.

In fact, corn snakes are often considered one of the species that is best-suited for captivity. A notion with which I’d wholeheartedly agree. So, be sure to review the information presented below, to help determine if a corn snake is a good species for you.

Before learning about the husbandry of corn snakes and the type of care they require, you’ll need to familiarize yourself with the basics of the species:

Lifespan: How Long Do Corn Snakes Live in Captivity?

Corn snakes are fairly long-lived reptiles. Like most other reptiles, wild corn snakes have a very high mortality rate during the first year or two of life, as they’re consumed by a variety of predators. However, many of those who reach adult size likely live for 10 years or more.

In captivity, corn snakes routinely reach the 20-year-mark when maintained by skilled and experienced keepers. And the oldest recorded individual lived for 32 years and 3 months.

Size & Weight: How Big Do Corn Snakes Get?

Corn snakes are medium-sized serpents. Typically, adults will reach lengths of 3 to 5 feet, depending on their geographic origin. However, the largest specimens will approach or slightly exceed 6 feet in length. Most adults will weigh between 1 and 3 pounds. 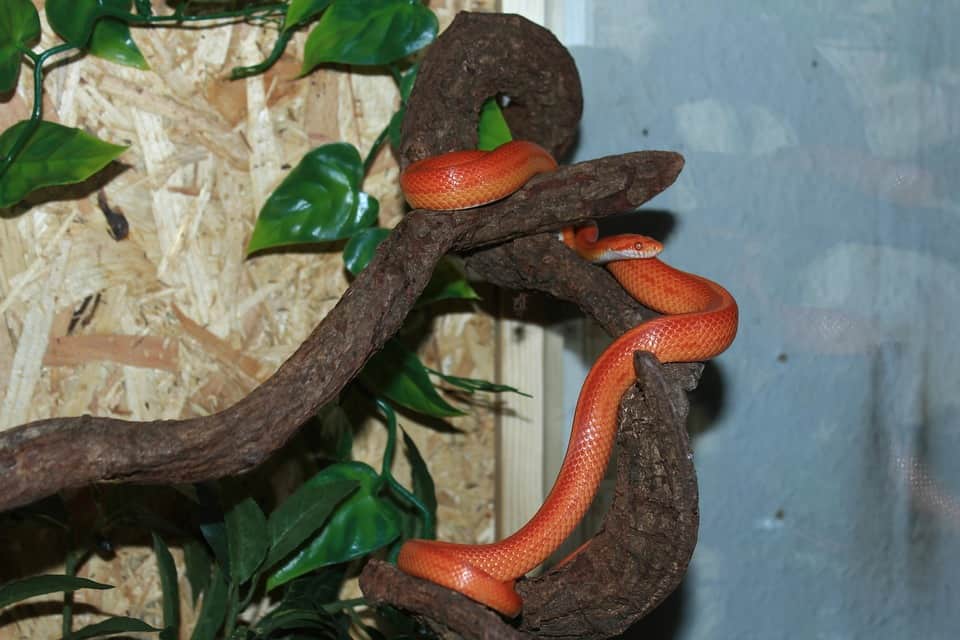 Juvenile corn snakes are often a bit nippy. But they typically calm down over time and become quite docile as adults. There are, however, exceptions, and some corn snakes will remain willing to bite for their entire life.

Nevertheless, corn snake bites are rarely serious. They usually result in little more than a few barely visible pinpricks. If you are nervous about being bitten, you can simply wear some outdoor work gloves when handling your pet. They should provide sufficient protection from your snake’s teeth.

Health & Behavior: What Is Common and Unusual?

For the most part, corn snakes are fairly hardy serpents, who don’t exhibit many bizarre or unusual behaviors. We’ll talk about some of their basic behavioral and health traits below.

Like most other snakes, corn snakes are not particularly active. In fact, they’ll spend the vast majority of their time resting or sleeping (it is difficult to tell when a snake is sleeping versus resting, as they lack eyelids). Most commonly, they’ll spend their time coiled up in a hiding space. But they may also lounge on top of their climbing branches. Rarely, they may even lay out in the open.

From time to time, you’ll also see your snake exploring the habitat. This may occur during the day or night. Typically, corn snakes will become most active when they are hungry. But they may also become active during seasonal changes or before shed cycles.

Like all other snakes, corn snakes will shed their skin periodically. This is associated with growth, but it also serves as a way for the snake to replace damaged scales or repair other wounds.

The entire shedding process typically takes about one week to complete, but there are exceptions. Some snakes will occasionally exhibit rather lengthy shed cycles, which can take up to two weeks to complete. The first thing you are likely to notice when your snake is entering a shed cycle is a generally dulling of his color.

A few days later, he will start to appear somewhat cloudy, and a few days after that, his eyes will turn bright blue (snakes are often said to be “in the blue” during this phase of the shed cycle). This occurs because your snake’s body will begin producing a lubricating fluid between the old, outer skin and the new, fresh skin beneath. This fluid also occurs between the outer and inner scales of your snake’s eyes (called the spectacles), which causes them to look blue.

A few days later, your snake’s eyes will clear up and he’ll look completely normal again. Then, a day or two later, he’ll typically shed his skin, starting the entire process anew.

Ideally, your snake should shed in one long, complete piece. But snakes who are sick, stressed, recovering from injury, or maintained in excessively dry conditions, will often shed in several smaller pieces. In some cases, your corn snake may even retain portions of his old skin. This is usually relatively easy to rectify by soaking your snake in a shallow (about 1-inch-deep) water for an hour or so, and then gently rubbing the affected area.

Part of the appeal of corn snakes is their appetite and willingness to consume frozen-thawed rodents. Young (hatchling) corn snakes occasionally prefer rodents that have been scented with lizards, birds or frogs, but by the time they’re offered for sale, most corn snakes are readily eating unscented rodents.

However, snakes can refuse food for a variety of reasons. Sometimes they do so because they are entering a shed cycle, or they are undergoing seasonal dormancy (during the fall or winter). In some cases, they may refuse food because of their reproductive condition (gravid females often refuse food, as do males who are interested in finding mates). Additionally, illness and improper husbandry can also cause a snake to refuse to eat.

Generally speaking, you shouldn’t worry very much if your snake refuses one or two meals. It takes snakes a very long time to starve (months to years), and most will begin eating again once they shed, deposit eggs, or otherwise deal with the problem that was preventing them from eating.

However, if your snake does not eat for three to four weeks, it is wise to review your husbandry practices and contact your vet. Things like respiratory illnesses and parasites can cause a snake to refuse food, and you’ll want to address these issues promptly, to give your pet the best chance at a full recovery.

Although corn snakes are typically healthy serpents, they are susceptible to many illnesses. You can help your snake avoid many illnesses by simply maintaining the habitat properly, and your vet can often help you treat any illnesses that do occur. But it is imperative that you keep an eye out for any signs of trouble, so that you can address them promptly.

A few of the most important signs and symptoms of illness you must watch for include:

If you notice any of these symptoms, be sure to make any husbandry changes necessary and contact your veterinarian. 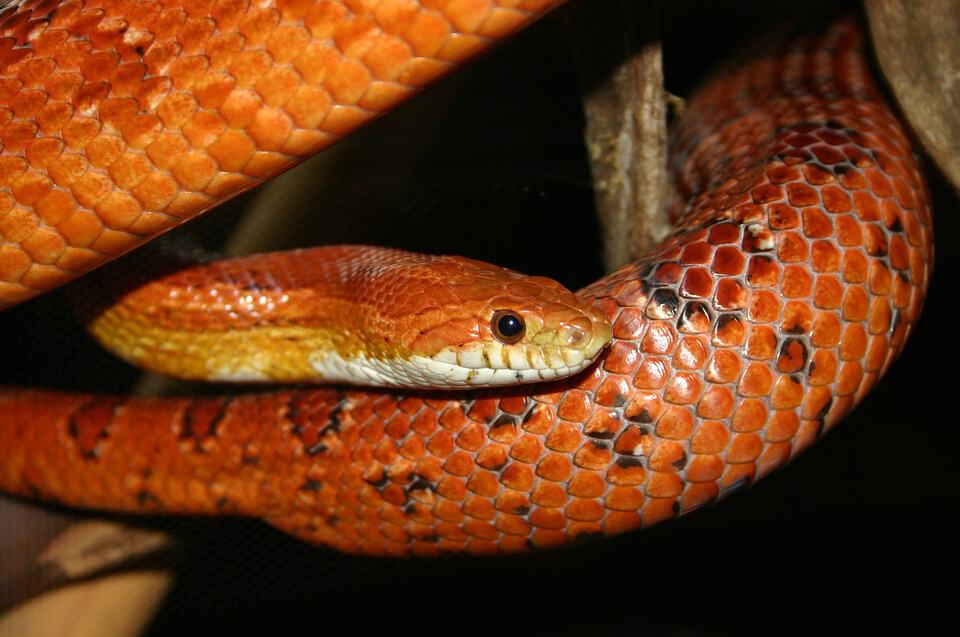 In most respects, corn snakes are easy to house. We talk about their housing requirements in greater depthhere, but we’ll discuss the basics below.

Glass aquaria are acceptable enclosures for corn snakes, provided that they are fitted with a screened top to provide ventilation. However, plastic enclosures designed specifically for reptile maintenance are generally the better option.

Plastic enclosures are not only lighter and more durable than glass aquaria. They typically feature front-opening doors which make maintenance easier.

Additionally, plastic enclosures are usually opaque on all but one side, which will help keep your pet comfortable and stress-free.

You’ll need to add a few things to the habitat to make it comfortable for your snake. This includes a safe substrate, a water dish, and at least one hiding box. Climbing branches aren’t necessary, but most corn snakes will use them.

It is also important to maintain appropriate temperatures and establish a thermal gradient (range of temperatures) in the habitat. This will require you to purchase and install a heating device of some type and a digital thermometer.

Heat pads, heat tape, and radiant heat panels are all options. But they’ll require you to purchase a thermostat, which will keep these devices at the appropriate temperature. Instead, you can also use a heat lamp, which doesn’t require a thermostat.

What Is the Corn Snake Diet?

Wild corn snakes hunt a variety of different species, but it is usually wise to provide captive corn snakes with a rodent-based diet. Unlike frogs and lizards, which may transmit parasites to your pet, commercially reared rodents are relatively unlikely to cause similar problems. Additionally, commercially reared rodents are readily available and pretty affordable too – particularly if you purchase them in bulk.

Hatchling corn snakes are obviously not large enough to handle a full-grown mouse. You’ll need to start your pet on neonatal mice (called “pinkies” or, once they develop a bit of hair, “fuzzies”). As your snake grows, you’ll be able to gradually increase the size of the rodents provided. Within 6 to 12 months, your snake should be able to consume adult mice. Most adults eventually grow large enough that you’ll need to feed them multiple mice or a single small rat on feeding days.

Corn snakes are perfectly capable of catching, subduing and killing live rodents. But – just as occurs in the wild – they may occasionally become injured in the process.

Accordingly, it is advisable to forego live rodents and instead feed your pet prekilled, frozen-thawed mice or rats. This is also a more humane practice for the rodents used to feed your pet.

We discuss feeding corn snakes in greater depthhere, so be sure to review that article before you bring home your new pet. 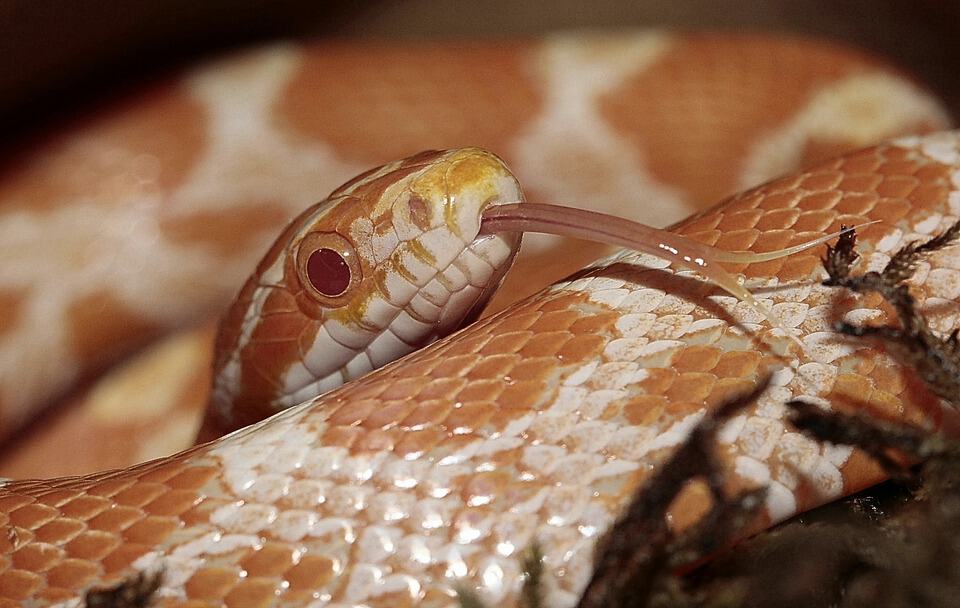 Price: How Much Do Corn Snakes Cost?

Corn snakes vary wildly in terms of price, based on their age, sex, appearance and genetic makeup.

However, there are dozens of different color and pattern mutations available – including individuals who display several different mutations simultaneously. Some of these mutations are so common that they cost little more than normal-looking corn snakes. But others fetch hundreds of dollars. Those who exhibit particularly rare mutations or possess unique combinations of mutations may creep into four-digit-price-tag territory.

Corn Snakes as Pets: Are They Good Pets?

As you can see, corn snakes possess a number of traits that make them very attractive to reptile-keeping enthusiasts. They are generally docile and inoffensive. Also, they are hardy and easy to maintain. And, they reach almost ideal sizes in the minds of most keepers. Additionally, they come in an array of colors and patterns to suit keepers with different aesthetic tastes.

All of these things combine to ensure that corn snakes are not only good pets. But they may very well be the very best pet snake species available – particularly for novices.

6 thoughts on “Corn Snake Care Sheet: A Simple (But Complete) Guide for Beginners”