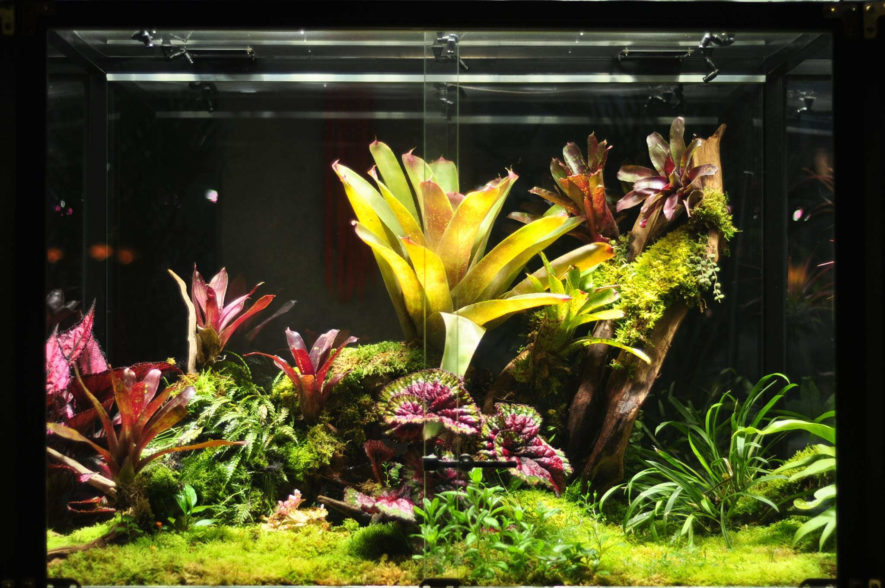 Substrate selection is a topic of considerable discussion and debate.

As the art and science of vivarium design have matured, reptile and amphibian keepers have begun utilizing rather similar strategies.

When devising a substrate plan for your vivarium you first need to create a supportive, foundational layer. This will provide a base on top of which you’ll add other types of substrate.

Whereas the upper substrate layers are designed to address your animal’s needs, the foundational layer should address the physical requirements of the habitat as a whole. Think of the base layer as the bedrock lurking beneath the soil in your backyard.

The foundational layer also serves as a reservoir to contain excess water. You’ll need to water the plants regularly and add water to the habitat for your animal’s needs. A drainage layer helps prevent the upper levels of substrate from becoming saturated.

There are three primary materials you can use to accomplish these goals and to create a good foundation.

Gravel was the go-to material for making a base layer for decades. And although it may not be quite as popular among modern keepers, who have several alternative options, it is still a great choice. Gravel is very easy to arrange in different ways, which means you can create contoured landscapes.

It also allows water to drain quite readily and looks natural. Some keepers like to use a single type of gravel for the foundation, while others prefer to use several different layers of gravel. Typically, this means using very large rocks at the bottom and layering gravel of decreasing size on top.

As their name suggests, clay pellets are small circular bits of clay, which typically have hollow cores. They’re very popular among modern keepers, and in many cases, they’re chosen in lieu of gravel. Part of the reason they’ve become so popular is that clay pellets are much lighter by volume than gravel is.

This just makes them easier to deal with and alleviates some of the weight-related problems gravel presents. A vivarium with a thick layer of gravel is incredibly heavy. And while clay pellets are often slightly more expensive than gravel is, the two materials are relatively similar in price.

Plastic grate material (like egg crate) is another popular choice among some keepers. The primary benefit provided by plastic grating is that it is easier to set up and remove as necessary while cleaning. It is also more stable than gravel or clay pellets and will stay in place while you rearrange plants and other items in the habitat.

Although screen is typically used between a base layer and the upper layers of substrate, you should use screen with plastic grate material, as the substrate would simply fall in between the holes otherwise.

It will also make tending the habitat easier, as you can simply lift the screen and substrate out at the same time.

It is also possible to forego the base layer and instead create a false floor. To do so, you’ll essentially need to create a “table” or box that is placed in the bottom of the habitat. The upper layers of substrate can then be placed on top of the table. This will provide the support and structure a base layer normally does. This is best accomplished with thin layers of plastic, but you could conceivably use glass or sealed wood if you prefer.

False floors can present challenges for drainage, so you’ll need to be careful to avoid adding too much water to the habitat when using them. Excess water will simply pool on top of the false floor, where it will stagnate and promote bacterial growth.

However, false floors present wonderful opportunities for hiding water filters, pumps, thermometers, thermostats and other devices. By storing items under a false floor, you can keep the area surrounding your vivarium clutter free. And although this is often overlooked by keepers, the only way to ensure your vivarium looks its best is to keep the entire area tidy.

The secondary substrate layer is typically the most voluminous of the three. It will serve to give your pets a soft surface on which to walk, slither or lay. And it will serve as the growing medium for any plants in the habitat (unless you keep the plants in pots). The secondary substrate layer will also store moisture, which will help elevate the humidity level in the habitat.

There are a number of different materials used for the second substrate layer, here are the most common choices.

Cypress mulch is comprised of chunks and fibrous bits of cypress trees. It is an excellent choice in many respects, as it retains moisture well, resists decay and looks fantastic. It also smells rather pleasant.

A few of the primary drawbacks of cypress mulch are that it often features sharp sticks, which can injure the keeper and the kept. Also, there are some concerns about the environmental impact of the cypress-mulch harvesting process. Additionally, while it is very inexpensive and easy to find for those living in the southern United States, it can be a bit more difficult to find and more expensive for keepers living in other areas.

Orchid bark is so named for its popularity among orchid enthusiasts. In reality, it is comprised of the bark of fir trees. Orchid bark provides many of the benefits that cypress mulch does. It retains moisture well (although not quite as well as cypress mulch), and it looks pretty natural.

It is also safer to use in many cases, as most orchid bark pieces are nugget-like. This means you won’t encounter as many sharp sticks as you would with cypress mulch. Orchid bark is often quite affordable in the Pacific Northwest, where the trees are harvested. However, it is often quite expensive for those living in other areas.

This is another popular option among keepers, particularly those who intend on installing plants directly in the substrate. Potting soil retains moisture well and looks very natural, but it can become compacted if not “tilled” regularly.

This will limit root growth of the plants and slow drainage into the bottom substrate layers.

Perhaps the most realistic-looking substrate you can select for a rainforest vivarium is natural dirt. And in addition to looking fantastic, it offers most of the benefits other substrates do. For example, it retains water well and is a great planting medium. And it doesn’t present the hazards that things like cypress mulch do.

Additionally, natural dirt is generally free – you can just dig up a bucketful or two and bring them back to the vivarium. Try to collect soil from a forested area, as this will generally include microorganisms that help encourage root development and break down wastes from your pet.

Coconut fiber is typically sold in compressed blocks, which expand once you add a bit of water and break them apart with your hands. It is pretty affordable and looks reasonably good, although it can represent an ingestion hazard for some pets. And, while you may be able to grow some very hardy plants directly in the medium, it isn’t as nourishing as potting soil or natural dirt is.

The final layer of substrate – the surface layer – is primarily included to improve the aesthetics of the habitat. In fact, you needn’t include this layer at all, if you don’t want to. However, a well-selected surface layer can elevate a vivarium’s appearance drastically, so it is typically something keepers like to incorporate. Also, it will eventually decompose offering some nutrients for your plants, microorganisms and clean-up crew (springtails and isopods).

There are a number of different substrates you could use for the surface layer. But two choices are undoubtedly the most popular among reptile and amphibian keepers:

Leaf litter is perhaps the most natural-looking substrate you can use in a rainforest vivarium. After all, the floor of most rainforests is covered in a thick blanket of leaves, which have been shed by the trees above. Leaf litter is rarely available commercially, so you’ll likely have to collect it yourself.

Note that some leaves – particularly those rich in tannins, such as oak leaves – may leach into the water and cause discoloration. However, this is usually nothing more than an aesthetic concern, which will not harm your animals.

A variety of mosses can be used as a surface substrate. Most mosses hold a remarkable amount of water, which makes them very helpful for maintaining high humidity levels. They also provide the habitat with a variety of different textures.

This can help improve the realism of the habitat, and truly make it resemble a rainforest.

You can collect mosses yourself, but they’re often difficult to sustain in the habitat. Instead, try to purchase living mosses, which are specifically intended for use in vivaria.

Should You Sterilize Substrates Before Using Them in Your Vivaria?

Some substrates may be infested with small bugs and microorganisms – particularly those that you have harvested yourself. This leads some keepers to consider sterilizing substrates before adding them to a vivarium.

Typically, this is accomplished by spreading the substrate out on a metal pan or cookie sheet and cooking it in the oven. Usually, 15 to 20 minutes at 350 degrees should be sufficient to kill any creepy crawlies living amid the wood or dirt (cooking live moss will kill it).

However, I have personally never found this necessary. Neither the soil you have harvested nor wood-based substrates purchased at garden centers or home improvement stores are likely to contain creatures that will harm your pet.

Most of the insects and invertebrates contained in these substances feed on the organic debris in the substrate, so they won’t cause any problems.

In fact, many of these organisms can help create a “bioactive” substrate, in which waste products are rapidly broken down into their constituent components. This will help keep your vivarium cleaner and provide better conditions for plant growth (we’ll discuss bioactive substrates in a future article).

However, I have typically made one exception: I do sterilize any substrates purchased from pet stores. Unlike materials purchased from other outlets, bags of wood chips, coconut husk or soil hailing from pet stores may be infested with snake mites. These can present problems for snake or lizard keepers, so you should take steps to mitigate these problems before they occur.

Let us know what is your favorite choice for the different layers of substrates. And if you found this article helpful, support us by sharing it with your reptile- and amphibian-keeping friends!

2 thoughts on “Vivarium Substrate Selection: the 10 Most Common Substrates”